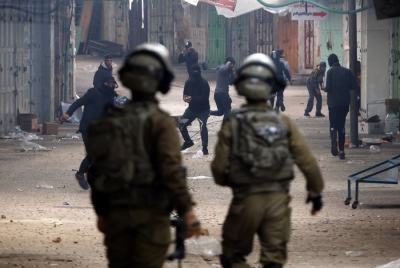 Ramallah, May 21 (Ajit Weekly News) Scores of Palestinian protesters were injured during clashes with Israeli soldiers in several West Bank towns and villages, according to the Palestine Red Crescent Society.

Among the injured were three shot by live ammunition, 71 by rubber bullets and dozens who inhaled tear gas, according to the organisation.

Fierce clashes broke out near the villages of Beita and Beit Dajan, south and east of Nablus city respectively, and near the village of Kafr Qaddum, east of Qalqilya city, eyewitnesses said.

Dozens of anti-settlement Palestinians burned tires and threw stones at the Israeli soldiers stationed on the outskirts of the villages, they added.

The Israeli authorities have not given any comment on the incidents.

The Masafer Yatta area near the southern West Bank city of Hebron also witnessed clashes, where Israeli soldiers used tear gas against protesters, according to Palestinian officials and eyewitnesses.

Fouad Al-Amour, a Palestinian activist, told Xinhua that local residents and Palestinian and foreign activists took part in a protest against an Israeli court ruling to displace eight Palestinian communities from the area.

He said the Israeli soldiers fired stun grenades and tear gas at the protestors, causing dozens of them to suffocate.

The Palestinians have been organising weekly protests in the villages, towns and cities of the West Bank on Friday to denounce Israel’s settlement expansion and land confiscation.

Israel occupied the West Bank and East Jerusalem, both claimed by the Palestinians, in the 1967 Middle East war.