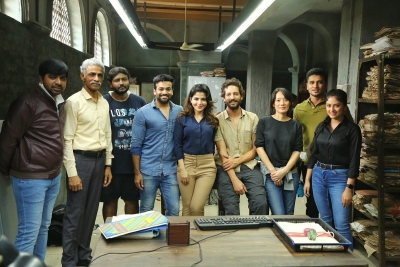 Hyderabad, May 21 (Ajit Weekly News) For the pan-India action thriller ‘SPY,’ Nikhil Siddhartha has teamed up with editor-turned-director Garry BH. The recent update by the makers hints at an exciting detail regarding the movie.

An intense action block is currently being shot, according to the recent press release by the makers. Nikhil and Bollywood’s Makrand Deshpande (‘Romantic’ and ‘RRR’ fame) have a major part in the current schedule, which is expected to be the highlights of the movie. Abhinav Gomatam is also taking part in some of the shots.

Keiko Nakahara and Julian Amaru Estrada, both cinematographers who previously worked on Ajay Devgn’s blockbuster ‘Tanhaji’ and for multiple Hollywood projects respectively, are a part of this movie.

The film will be released in all major South Indian languages, as well as Hindi, for Dussehra this year.