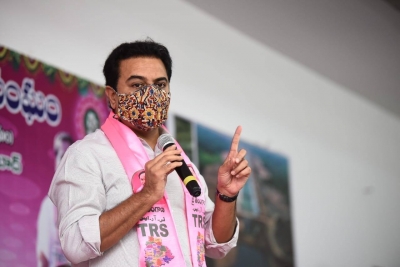 Hyderabad, May 21 (Ajit Weekly News) Telangana’s minister for industries and information technology K.T. Rama Rao has urged the Indian diaspora to support the state to continue the progress.

Currently on a visit to the UK, the minister addressed the Indian diaspora at a ‘Meet and Greet’ event in London on Saturday. In his speech, he highlighted the achievements of Telangana government in the past eight years.

KTR, as the minister is popularly known, noted that the members of Indian diaspora have supported the Telangana movement and have always promoted Telangana wherever they are in the world. He thanked the Indian diaspora members for their continued support.

He stated that the Telangana delegation had fruitful meetings with heads of various companies during the official visit.

“My job is to promote Telangana and bring investment and create jobs for the people of Telangana. We will establish deeper connections with the UK in the days to come,” a statement issued by his office in Hyderabad quoted him as saying.

“Contribute back to your motherland by supporting us in creation of wealth, employment opportunities, and ensure we motivate others back home. Let’s ensure the growth story continues,” KTR said.

The minister mentioned that the Telangana government has already inaugurated IT Towers in Khammam, Karimnagar and will soon inaugurate IT Towers in Mahabubnagar and Nizamabad. He also added that there is a great IT sector presence in Warangal.

He highlighted that Kaleshwaram Lift Irrigation Project (KLIP) was constructed in less than four years and is providing water for irrigation to lakhs of acres. He stated that KLIP is the world’s largest lift irrigation project and everyone should feel proud that it is in India.

KTR told the Diaspora that the world’s largest Amazon campus is situated in Hyderabad.

He said: “Google, Facebook, Micron, Apple, Qualcomm, Uber, Salesforce, and Novartis — all of their second largest campuses are in Hyderabad and they all have come in the last six years. They have chosen Telangana because of its stable leadership and able governance.”

These are the numbers given by the Ministry of statistics and program implementation of Government of India.

“Telangana is the 11th largest state geographically and 12th largest as per population. But according to the Reserve Bank of India, Telangana today has emerged as the 4th largest contributor to India’s economic growth,” KTR added.