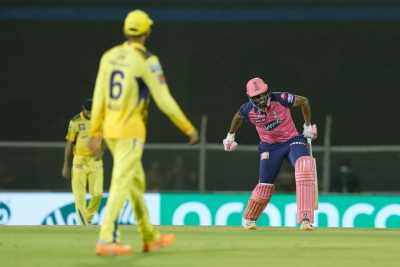 After Devon Conway had struck a four and a six off Trent Boult in the third over, Moeen Ali, who came in at the fall of Ruturaj Gaikwad in the first over, blasted 18, 16, and 26 runs in the next three overs, dealing mostly in fours and sixes. Moeen completed a 19-ball half-century.

However, the Rajasthan Royals bowlers managed to apply the brakes in the next eight overs bowled by Ravichandran Ashwin, Obed McCoy, Yuzvendra Chahal, and Trent Boult. Chennai could score only 42 runs in these overs, losing three wickets that did not help matters.

The Rajasthan bowlers bowled good line and full-length, they varied the pace as the ball would stop and occasionally move around. But there were no demons in the pitch and batting was difficult but not impossible as Moeen Ali and RR’s Yashasvi Jaiswal showed with their superb knocks.<br> <br>Despite having a well-set batter in Moeen Ali, who was batting with a half-century, CSK could not score brisk runs, losing the advantage they had gained in the powerplay. Such was the stranglehold of the bowlers that CSK could not score a single boundary in 45 deliveries between 7-15 overs.

In the end, Moeen got out on 93 runs, adding 89 runs for the second wicket with Devon Conway and 51 for the fifth wicket with skipper MS Dhoni. In the slog overs, CSK managed only 33 runs as they ended with a sub-par score.

Chasing 151 for victory, Rajasthan Royals were looking in trouble at 76/3 in the 12th over with Yashasvi Jaiswal and Ashwin at the crease. They added 28 runs for the fourth wicket to take the score past 100.

Jaiswal got out on 59 runs but Ashwin continued, as he struck two boundaries and two sixes and remained not out on 40 towards the end of the Rajasthan Royals innings as they won by five wickets. During his unbeaten 40, Ashwin struck two fours and three sixes as Rajasthan won the match and moved to the second spot in the points table.