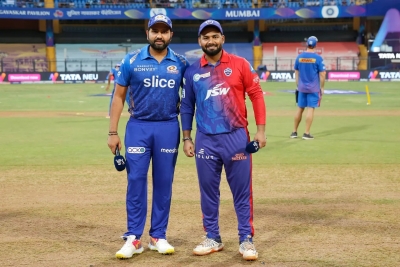 Mumbai, May 21 (Ajit Weekly News) Mumbai Indians’ skipper Rohit Sharma won the toss and elected to bowl first against Delhi Capitals in Match 69 of the IPL 2022 at the Wankhede Stadium here on Saturday.

Rohit said that he would like to restrict Delhi so that his batters can bat freely. He said they want to finish the IPL 2022 on a high.

“We’ve done well and will like to know the score-chasing. We’ll look to restrict them and later bat freely. We were inconsistent and failed to perform collectively. The focus has been on that. We’ve tried in the last few games with an eye on the future. But winning is important as that gives confidence. We want to finish on a high,” Rohit said at the toss.

Mumbai made two changes in their playing XI, bringing in Dewald Brevis for Tristan Stubbs and Hrithik Shokeen for Sanjay Yadav.

Delhi skipper Rishabh Pant said they wanted to bowl first but would now like to set a good target.

Delhi made one change with opener Prithvi Shaw coming in for Lalit Yadav.