IPL 2022: 'Found this in archives', Karthik reminds Mumbai Indians of his playing days with them 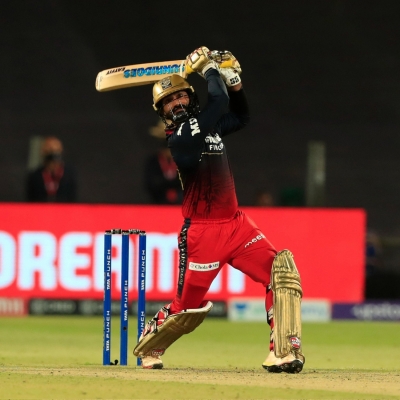 Mumbai, May 21 (Ajit Weekly News) Ahead of Mumbai Indians’ last match of IPL 2022 with Delhi Capitals, Royal Challengers Bangalore (RCB) wicketkeeper-batter Dinesh Karthik has reminded the five-times champion of his playing days with them in the previous seasons of the league.

Karthik’s post has come at a time when RCB will be hoping that MI end their season with a win against Delhi Capitals as it will benefit the Faf du Plessis led side. Notably, Mumbai Indians’ win will ensure RCB’s spot in the playoffs.

On the other hand, the equation is simple for Delhi Capitals (+0.255) who could move level on points with RCB and reclaim fourth spot if they beat bottom-placed Mumbai in the crucial tie.

“Found this in archives,” Karthik wrote with the ‘fingers crossed’ emoji along with his picture wearing Mumbai’s jersey.

The right-hander batter played for Mumbai Indians in 2012 and 2013. This is Karthik’s second stint with RCB after the 2015 season when he was acquired for a whopping Rs 10.5 crore. At the IPL mega auction held earlier this year, he was bought by RCB for Rs 5.5 crore.

With Bangalore’s hopes of a maiden IPL title hanging by a thread, Kohli had earlier also joked about turning into a Mumbai supporter. Bangalore skipper Faf du Plessis even chanted ‘Mumbai… Mumbai’ in a video shared by the IPL on Twitter.

“Trying to put our feet up and chill out for 2 days and support Mumbai. We have 2 more supporters for Mumbai, not just 2 but I think 25 more supporters,” Kohli told du Plessis.

“You might see us in the stadium as well,” he added while du Plessis started with the “Mumbai, Mumbai” cheer.