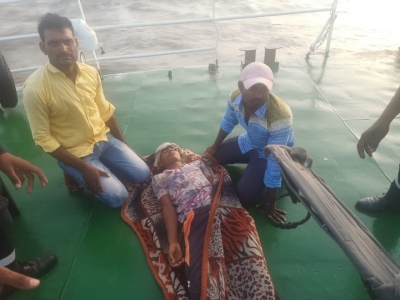 Ahmedabad, May 21 (Ajit Weekly News) The Indian Coast Guard (ICG) on Saturday rescued an injured fisherman who was on board a boat in the Porbandar Sea.

The rescue operation was carried out by the ICG Station in Pipavav which received information about the injured fisherman Dhan Prasad from the Fisheries Association, Jafrabad.

Upon receiving the information, the ICG Station commissioned a helicopter and a ship for the rescue operation.

After confirming the location, the helicopter assisted the ship to reach the boat.

As it reached the boat, a medical team from the ship first stabilised the injured fisherman with first aid and then evacuated him.

Dhan Prasad was handed over to the Fisheries Association and is reportedly stable.

This is the second such rescue operation in the last 48 hours.