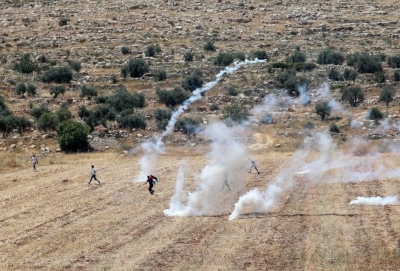 Ramallah, May 21 (Ajit Weekly News) Dozens of Palestinian protesters were injured during clashes with Israeli soldiers in several West Bank towns and villages.

Among the injured, three were shot by live ammunition, 71 by rubber bullets, and dozens suffered from inhaling tear gas, Xinhua news agency quoted the Palestine Red Crescent Society as saying.

Fierce clashes broke out near some villages in the West Bank and dozens of anti-settlement demonstrators burned tires and threw stones at the Israeli soldiers.

Dozens of Palestinian protesters suffered from inhaling tear gas during clashes with the Israeli soldiers in an area near the southern West Bank city of Hebron.

The Palestinians have been organising weekly demonstrations in the villages, towns and cities of the West Bank on Friday to denounce the Israeli settlement expansion and land confiscation.