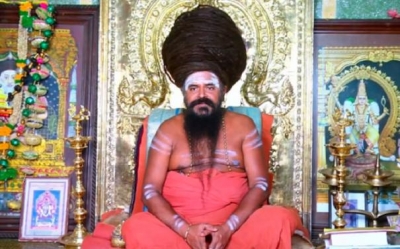 Chennai, May 21 (Ajit Weekly News) The Dharmapuram Aadheenam mutt seer was carried on a palanquin by people on the occasion of ‘Guru Pooja’ after the Tamil Nadu government lifted the restriction on the programme imposed by the Mayiladuthurai Revenue Divisional Officer (RDO).

Earlier this month, the Mayiladuthurai district administration had banned the Dharmapuram Aadheenam mutt seer from travelling on palanquins carried by people in a ritual called the ‘Pattina Pravesham’.

The seer was carried from his abbey to the mausoleum of tombs of his predecessors by his disciples on a palanquin Saturday. Pattina Pravesham will be held on Sunday, wherein the seer will be carried on a palanquin through the city.

The RDO of Mayiladuthurai, J. Balaji, had denied permission for the ritual of Pattina Pravesham following objections from the Dravidian and Periyarist outfits.

The outfits had claimed that the mutt’s centuries old practice was regressive and violative of human rights.

The state government revoked the ban after the Dharmapuram Aadheenam seer, Gnanasambandha Paramacharya Swamigal, met Chief Minister M.K. Stalin and sought his intervention to revoke the ban on Pattina Pravesham.

The opposition BJP and AIADMK had come out against the ban announced by the Mayiladuthurai RDO.

The palanquin bearers had also said that there were no rights violations as they did not have any objection to carrying the seer as he was their spiritual guru.

The palanquin carriers had pointed out that they have been regarded as ‘Sripatham Thangigal’ for several generations.

With the state government revoking the ban, all eyes are now Sunday’s programme.