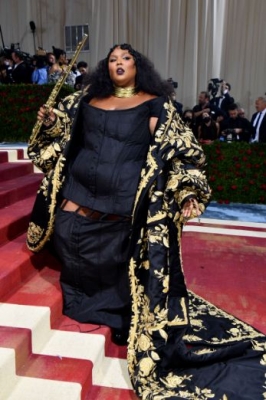 After the ‘Avengers: Endgame’ actor had posted videos of himself playing piano on social media, the ‘Juice’ hitmaker had reached out to him to ask for a collaboration on her upcoming album ‘Special’, but he failed to take her seriously, reports aceshowbiz.com.

“I literally hit (Chris) up and was like, ‘Play piano on my album’ and he just said, ‘Ha ha,’ ” the 34-year-old pop star recalled the interaction between them.

“It would have been really cool, but unfortunately not this time!”

The multi-Grammy Award winning star, whose real name is Melissa Jefferson, also addressed recent rumours that she would be joined by ‘As It Was’ hitmaker Harry Styles on the upcoming album after she performed with him at Coachella back in April, but brushed them off as Internet gossip.

She said: “That is so funny. The Internet going Internet. That’s all I’ll say about that.”

In the meantime, Lizzo, who is set to release her fourth studio album in July 2022 although little else is known about the project, explained that she wrote the lead single ‘About Damn Time’ mere months ago but felt that she needed to launch it as quickly as possible despite having worked on the rest of the record for over three years.

Speaking on the ‘Spout’ podcast, she said: “I felt like it was urgent. I wrote (‘About Damn Time’) like two months ago. And mind you, I’ve been working on this album for three years, so this is technically and literally the last song I wrote for the album, and it felt like, okay, put this out right now.”

“The world needs this. You need this right now. This song is about just how much we’ve been through collectively as a people, but also personally, and how we need to take a moment to ourselves to refuel and and celebrate our survival and celebrate life,” she added.

“But I think fans will be surprised by just how many songs are on the album.”