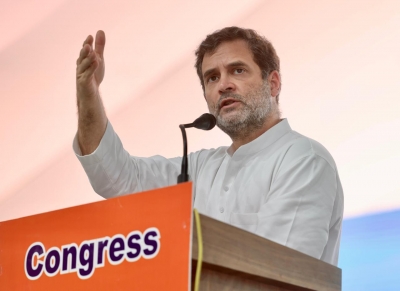 New Delhi, May 21 (Ajit Weekly News) Congress leader Rahul Gandhi has said the BJP and the RSS believe that India is a geography and play polarisation game, while the grand-old party believes in equality.

“We believe India is a negotiation between its people; The BJP and the RSS believe India is a geography; That it is a ‘Sone Ki Chidiya’ whose benefits should be distributed to a few according to the karma; We believe everyone should have equal access,” he said during an interaction at the #IdeasForIndia conclave, London.

He defended Indian Democratic setup and added that, “Democracy in India is a global public good. It is a central anchor for the planet. Because we are the only people who have managed democracy at the scale that we have. If that cracks, it is going to cause a problem for the planet.”

But he alleged that there is a systematic attack on the institutions that allow conversations to take place and the Constitution is under attack thus the result is that the states of India are longer able to negotiate.

“With polarisation and total dominance of media, the RSS has built a structure that has penetrated into the masses,” the Congress leader claimed.

“To counter the BJP, the Opposition parties and Congress need to go much more aggressively to the masses, to 60-70 per cent of people who do not vote for the BJP and we need to do it together.” he added.

Asked if India should return back to multi-alignment, he responded: “Pragmatically navigate the waters you are in. Look at the situation, take into account your country and requirements, the idea of prosperity and conversations; use those fundamentals to navigate.”

But said: “The Prime Minister doesn’t listen he must have an attitude that ‘I want to listen'”.