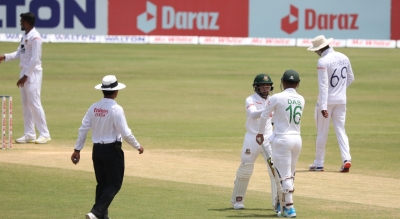 Mirpur, May 21 (Ajit Weekly News) Following the drawn first Test, hosts Bangladesh would be keen to turn things around when the second game of the two-match series commences at the Sher-e-Bangla National Stadium here on May 23, with vital World Test Championship (WTC) points at stake.

Sri Lanka’s Test record against Bangladesh is one of near-complete dominance, but with the visitors missing several key players, it could change the balance with the hosts targeting a first-ever series win over the island nation’s side in the longest format.

A win for Bangaldesh in Mirpur will see them pull away from England, who are at the bottom of the WTC standings in the nine-team table.

There were signs that the tide could be turning, with Bangladesh’s Tamim Iqbal and Mushfiqur Rahim notching up fine centuries, and wicketkeeper-batter Litton Das scoring a patient 88 in the drawn first Test.

Sri Lanka and Bangladesh had first met in the longest format in 2001, but it has been one-way traffic, with Sri Lanka winning 17 and losing just one of their 23 meetings so far.

Sri Lankan spin wizard Muttiah Muralitharan was at the forefront of the country’s complete dominance against the Tigers when he was around. In 11 matches he took 11 five-wicket hauls, picking up 10 wickets in a match on four separate occasions, according to ICC.

Murali took a bagful of wickets against every single opposition, averaging less than 26 against all but India and Australia. But his lowest average against a single opponent came against Bangladesh, with his 89 wickets coming at just 13.37, according to ICC.

Adding to Murali’s exploits, batting legend Kumar Sangakkara dominated the run-scoring charts between the two countries till he was around. The Sri Lankan great’s dominance against Bangladesh was extraordinary. In 21 innings he scored 1816 runs, with Mahela Jayawardene’s 1146 the next highest by any batter on either side.

Sangakkara’s runs came at an amazing average of 95.57, and a strike-rate of just under 60.

He also holds the record for the highest individual score in Tests between the two countries, with his 319 in Chattogram in 2014 being the biggest knock of his career.

Sri Lanka have a perfect record against Bangladesh across the first 12 Test meetings between the two nations, winning every single encounter between September 2001 and March 2013. But Bangladesh, whose win over New Zealand at the start of 2022 sees them above England in the WTC standings, have slowly improved their Sri Lanka statistics.

The head-to-head record since 2013 is still firmly in Sri Lanka’s favour, but in that time they have won just five of the 11 total meetings, with Bangladesh securing their first win in 2017 and also drawing five times — including last week’s first Test.

While it is not enough to make Mominul Haque’s team clear favourites to win the second Test and the series, the Tigers have made progress, and it was all too visible in the drawn first Test.