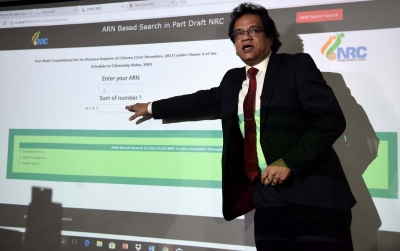 Guwahati, May 20 (Ajit Weekly News) The Assam National Registrar of Citizens (NRC) authority has filed an FIR against former NRC coordinator in the state Prateek Hajela, an official said on Friday.

The FIR also names some other officials and staff who were involved in the NRC updating exercise in Assam.

Hitesh Dev Sarma, the current NRC state coordinator has accused Hajela and others of criminal and anti-national activities. A case was registered in the CID department of the state.

Dev Sarma has narrated the details in his complaint letter to the Superintendent of Police, CID, to support his claim.

The letter states that in the NRC updating exercise, the “Family Tree Matching” procedure was adopted to check fraudulent practices used to make false linkage claims with persons residing in Assam in the pre-1971 era.

Since the NRC updating exercise involved large manpower, there was a provision for the quality checks to avoid erroneous entries in the NRC before the ‘Family Tree Matching’ was introduced. But, the procedure did not have any quality check system.

The NRC authority has also done some sample surveys in three places in the state to gauge the effect of an absence of quality checks. They found a good number of erroneous entries in the NRC list.

Dev Sarma says the software was deliberately designed to avoid quality checks. He accused Hajela of intentionally doing this which in turn gave free hands to some officials for including doubtful citizens in the NRC list.

According to Dev Sarma, this can be seen as an anti-national act affecting national security.

Hajela was also accused of violating a Supreme court order in 2018 which did not permit the NRC state coordinator to review the office verification of documents already completed for 24,89,745 people. But the letter to CID says that Prateek Hajela allowed the review exercise defying the top court directive.

In September 2019, the Assam Police had registered two cases against Hajela and a few unidentified officials over allegations of discrepancies in the NRC list.