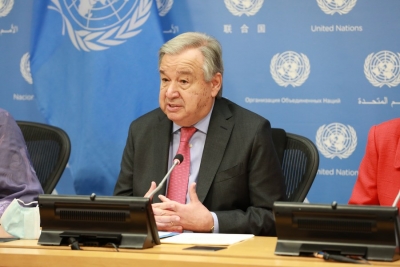 United Nations, May 20 (Ajit Weekly News) A UN adviser expresses concern over protests in Nigeria protesting the arrest of suspected slayers of a woman reportedly accused of blasphemy, a UN spokesman said.

Stephane Dujarric, the chief spokesman for UN Secretary-General Antonio Guterres, on Thursday said Alice Wairimu Nderitu, the special adviser on the prevention of genocide, is appalled by the killing of Deborah Samuel, reportedly over blasphemy allegations in Sokoto state, Nigeria, on May 12.

Wairimu Nderitu expressed her heartfelt condolences to Samuel’s family, and urged authorities to bring to account the perpetrators of this heinous crime.

The adviser is concerned about the supposedly organised and destructive protests in Sokoto “protesting the arrest of some of the perpetrators of this dastardly act,” Dujarric added.

“She hopes that this will not deter law enforcement from denying impunity to the alleged perpetrators.”

The adviser said the attack on Samuel “strikes at the heart of the diversity of the Nigerian nation,” the UN spokesman said.

“The special adviser recalls that expression of opinion and beliefs — including those seen to offend religious sensibilities — is protected in accordance with international law.”