Sangram keeps his 'Lock Upp' promise to Payal; two to marry in July 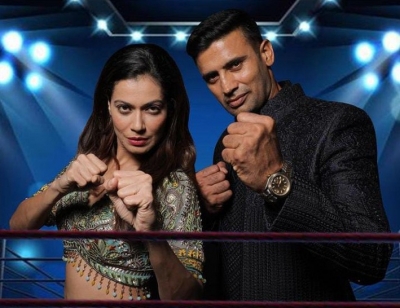 Mumbai, May 20 (Ajit Weekly News) Popular actress Payal Rohatgi and former wrestler Sangram Singh are all set to get married in the month of July. Sangram, who promised Payal on the reality show ‘Lock Upp’ to tie the knot in July has kept his promise and the couple took to their Instagram handle to announce their marriage by sharing a card and their photo in a boxing ring posed as wrestlers.

They captioned the post: “Coming this July. Where we get to say the vows!!! And be wedding-bound.”

The two met on the show ‘Survivor India 1’ and fell in love in 2012. They were also seen on reality shows such as ‘Nach Baliye Season 7’.

On the show ‘Lock Upp’, Payal has revealed the secret that she won’t be able to have a child. She even said that she has asked Sangram to look for some other girl but he refused.

However, dates have not been finalised yet. Sangram has told the media that initially he thought of July 21 but right now nothing is certain. But for sure the wedding will take place in the month of July.

For the photograph of the couple on social media, he has given credit to Kaaranvir Bohra for advising them to shoot like this as the couple are not keen on doing the usual pre-wedding shoots.