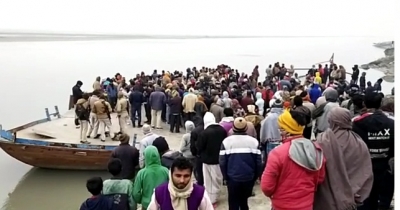 Patna, May 20 (Ajit Weekly News) Over 40 passengers had a narrow escape after three boats capsized in the Ganga off Maner town on the outskirts on Patna on Thursday, officials said.

The accident occurred due to strong storms in Patna and more than 15 districts in Bihar.

A majority of the passengers were boatmen and vegetable vendors who were crossing the river. While the boats were in the middle, strong winds started to blow and the boatmen were unable to control the vessels.

“The waves of the river also became turbulent and it was extremely difficult to steer the boats. Some of the boats were also carrying sand which added to the overload on the boats,” said Rajesh Kumar, one of the boatmen who swam to safety following the accident.

As boats started to go down, both the passengers and the boatmen jumped into the river, and as they were good swimmers, they reached the shores safely.

Due to strong winds, trees collapsed at several places in Bihar including in Patna, where a tree fells outside the Kotwali police station and a section of a vehicle parking shade also came down.

The power supply in Patna was also disrupted for six hours.

Meanwhile, the met department predicted mild to heavy rainfall and strong winds in several places of Bihar in the next 24 hours.