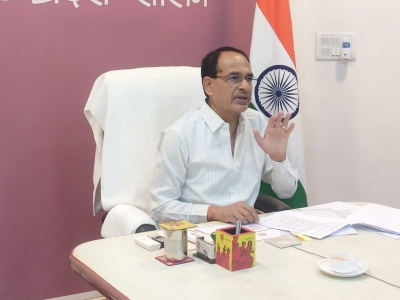 Bhopal, May 20 (Ajit Weekly News) Madhya Pradesh Chief Minister Shivraj Singh Chouhan will soon be spotted with a hand-cart (thela) on the streets of the state capital for a cause.

To kick-start a campaign aimed at creating awareness for prevention of malnutrition among children, Chief Minister Chouhan would push a hand-cart on the roads requesting people and collecting toys for kids enrolled in Anganwadi centres.

He made the announcement while chairing a meeting of the officials on the issue. “Soon, I would be moving around with a thela in Bhopal to collect toys for the children of Anganwadi kendra. The move would be a campaign to invite the people under Janbhagidari. This mission is to unite the people. I will fix a date for it soon,” Chouhan said.

The Chief Minister said that getting the children out of malnutrition is not the responsibility of Anganwadi workers. “We all have to find out the causes of malnutrition among them. There should be awareness in society regarding it,” he added.

Citing an example of initiative in his home town, Chouhan said he has requested the farmers of his village to donate food grains to Aaganwadi centres and a lot of people came forward and donated. “The government’s steps for making children recover from malnutrition and providing them paushtik aahar (nutrition) are different from the segment. We have to create awareness among the people regarding the root cause of malnutrition,” he added.

During the meeting with officials, the Chief Minister also inquired about the status of adopting Anganwadi Kendra in the districts. The Chief Minster had earlier appealed people come forward to adopt Anganwadi centres as part of their social responsibility.