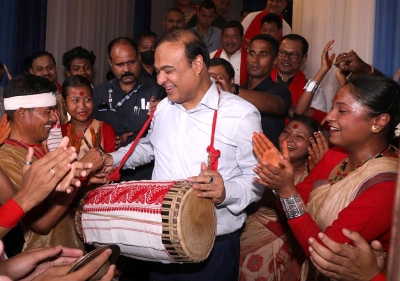 New Delhi, May 20 (Ajit Weekly News) It has been a little over one year since Himanta Biswa Sarma took over as the Assam Chief Minister, and majority of the people in the state seem to be satisfied with his performance.

This was revealed during an exclusive survey conducted by CVoter on behalf of Ajit Weekly News in the four states — Assam, West Bengal, Tamil Nadu and Kerala — and the Union Territory of Puducherry, where Assembly elections were held in 2021.

As per the survey, 42.92 per cent of the respondents in Assam are ‘very much satisfied’ with their Chief Minister’s performance, while 17.8 per cent chose the ‘not at all satisfied’ category.

As many as 36.74 per cent were ‘satisfied to some extent’ with Sarma’s work.

In neighbouring West Bengal, Chief Minister Mamata Bannerjee is not far behind as 38.88 per cent people are ‘very much satisfied’ with her work, while 41.28 per cent are ‘satisfied to some extent’. Collectively, 80.16 per cent of the respondents have shown their inclination towards the Trinamool Congress leader.

The percentage of people who are not satisfied with her work stood at 19.69 per cent.

In Kerala, according to the survey, Pinarayi Vijayan seems to be doing well as 41.94 per cent are ‘very much satisfied’ with the Chief Minister’s performance. A total of 30.22 per cent respondents are ‘satisfied to some extent’ while a substantial chunk of people, i.e., 26.22 per cent, are not satisfied at all.

In Tamil Nadu, DMK supremo M.K. Stalin’s performance is also being highly rated by the people. As many as 40.72 per cent are extremely satisfied with his performance while 43.85 are satisfied to some extent. It means nearly 85 per cent people of the state are liking Stalin’s work.

In Puducherry, 36.39 per cent are ‘very much satisfied’ with their CM N. Rangaswamy’s performance, while 18.38 are not satisfied at all. According to the survey, another 25.37 per cent are satisfied to some extent.