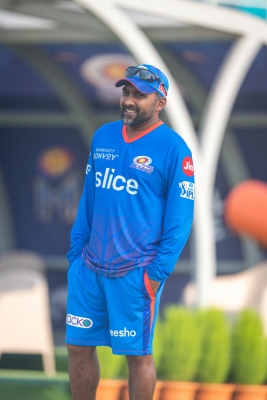 Mumbai, May 20 (Ajit Weekly News) Mumbai Indians head coach Mahela Jayawardene on Friday was left to rue about his team wasting opportunities to win initial matches of the IPL 2022, which in turn could have avoided their early exit from the league.

He added that making slow starts, a common feature for them in every IPL season, will have to be addressed ahead of the next season.

Mumbai’s forgettable time in the tournament, starting with eight consecutive losses before three wins arrived from the next five games, will come to a close with their final league match against Delhi Capitals at the Wankhede Stadium on Saturday. A win against Delhi may not be enough for the five-time champions to avoid finishing at the bottom of the points table.

“As any season where we start slow, which is a concern for us. The intensity that we played the first four-five games, where we had the opportunity to win matches (but) we didn’t execute certain skills, making mistakes, that is something we need to rectify. Because getting those early wins always gives team confidence and then you win matches from nowhere, that gives you that platform to get into the season and be dominant,” said Jayawardene in the pre-match virtual press conference.

Jayawardene further explained the mistakes which Mumbai made in their initial stages of the tournament. “So the intensity and execution, handling those little pressure situations in those early stages of the tournament that probably was a main concern for us this year. There were quite a few games where we had opportunities to win.”

“Usually we do finish those games, and this year which we didn’t – with the bat and with the ball both, we lost opportunities. That’s something we will talk to the guys and the make sure we are ready for those challenges going forward. It’s about the cycle, it’s about rebuilding the unit, understanding what the MI brand is. Yes, a lot of learnings for us this year and making sure we don’t make the same mistakes going forward.”

Asked about his learnings from Mumbai’s forgettable campaign as the head coach, Jayawardene remarked, “The learnings for me as a coach have been how different individuals react to situations. We had a core group but not like most others for far. This is a new group to us and as coaches, we always try to understand how they perform, what are their capabilities, skillsets and how they react to situations. It is important to assign roles to execute their plans, especially out there in the middle, who fits into what and how we can execute a perfect game.”

“More often than not, this year we haven’t done that, like the execution hasn’t been great. We didn’t have that killer instinct to close games off. The other teams were better. Once we sit down after the season, we will debrief. We’ll look at each game how we need to improve, where we need to improve, and rebuild from that.”

One of the big misses for Mumbai was England pacer Jofra Archer, who was recently ruled out of England’s upcoming summer of cricket due to lower back stress fracture. Jayawardene felt talking about Archer’s availability for the next season after missing the 2022 edition due to elbow surgeries and rehabilitation was way too early.

“I think to be honest, it is too far ahead. We just need to assess what the process is going to be. With stress fracture, obviously the consultants, ECB and then due process will follow. Our team of experts will keep monitoring his progress. He didn’t have these kind of injuries in the past, so it is something new.”

“Hopefully it is nothing too bad as we have had guys who had gone through it as well. So we will see how he progresses, but 10 months till next IPL, so there is a lot of time for us to assess his situation. We are hoping that he makes a strong recovery and he will be available for us next season.”