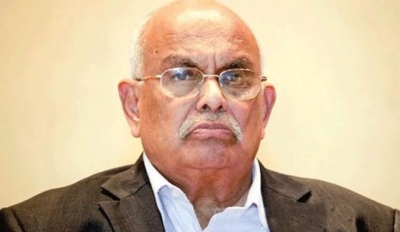 He was best known for writing the lyrics to historical revolutionary song “Amar Bhaier Rokte Rangano Ekushey February – Ami Ki bhulite Pari” – a tribute to the martyrs of the 1952 Language Movement.

Chowdhury was the Editor-in-Chief of the weekly ‘Joybangla’, the mouthpiece of the Mujibnagar government in 1971 and had witnessed many turning points in the history of Bangladesh.

He had lived in London since 1974, but still regularly wrote political commentary and discussed contemporary issues in newspapers of Dhaka. He also wrote poems, stories, novels, plays, memoirs, and essays.

Gaffar Chowdhury suffered from diabetes and kidney disease and was admitted to North Week Hospital in London two months back after his daughter Bonita’s death.

Bonita, 50, the third of Gaffar Chowdhury’s five children died in April while the legendary poet and journalist was in the hospital. She lived with her father in London and took care of him.

The Bangladesh High Commission in London says it is in touch with his family.

In a condolence message, Prime Minister Sheikh Hasina said: “Bangladesh has lost the wisdom of a legend who has enriched the nation’s history and culture through his writings and research.”

“Abdul Gaffar Chowdhury, who wrote the lyrics to ‘Amar Bhaier Rokte Rangano’, has elevated the spirit of the country’s Liberation War through his writings and cultural contributions. Until his death, he worked to protect secularism and the accurate history of the country, supporting Bangabandhu’s dream of a ‘Sonar Bangla’ or ‘Golden Bengal’.

“He inspired freedom fighters through his writings at Joybangla, a weekly newspaper published by Bangladesh Awami League during the 1971 Liberation War. Later, even when he lived as an expatriate, he wrote about the ideals of the Liberation War for local and foreign media,” she added.

President M. Abdul Hamid expressed his deep grief over his death and sent his condolences to the bereaved family.