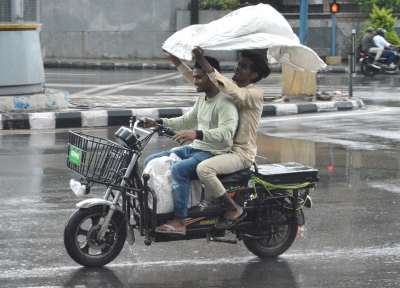 New Delhi, May 20 (Ajit Weekly News) After crossing the coast, the depression over south coastal Myanmar moved north-northeastwards with a speed of 14 kmph through the day bringing widespread rainfall in the region, ab IMD bulletin said.

“It is very likely to move further north-northeastwards and weaken gradually into a well-marked low pressure area over northwest Thailand and adjoining Myanmar during next 12 hours,” it said.

Light to moderate rainfall is expected at most places with heavy rainfall at isolated places very likely over Andaman Islands during next 24 hours.

Squally wind speed reaching 45-55 kmph, gusting to 65 kmph, is very likely to prevail over Gulf of Martaban, adjoining North Andaman Sea, and along and off south Myanmar coast during next 24 hours.

Sea condition is very likely to become rough to very rough over Gulf of Martaban, adjoining north Andaman Sea and along and off south Myanmar coast during next 24 hours, the IMD bulletin said, adding, fishermen are advised not to venture into these areas during next 24 hours.

As part of the duties of a Regional Specialised Meteorological Centre (RSMC) – designated regional centre by the World Meteorological Organisation (WMO) and manned by IMD scientists – these warnings have been sent to Myanmar and all other neighbouring countries too.