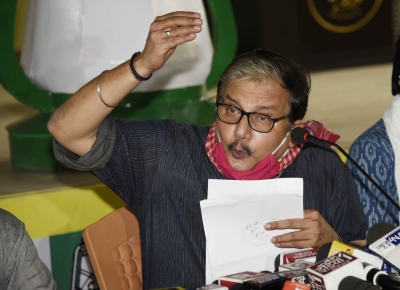 Patna, May 20 (Ajit Weekly News) The CBI raids in the 17 places of RJD chief Lalu Prasad Yadav and his family has led to political temperature of Bihar rising and his party is projecting it as a response, directed by the BJP, to stall Chief Minister Nitish Kumar’s “Paltimar” plan to form the government with them.

RJD Rajya Sabha member Manoj Jha, who is currently in London with party leader Tejashwi Yadav for a conference, said: “Whenever BJP realises that its government is shaking, political mobilisation is going on against them, then they try to create fear. But, neither we nor they (in a probable reference to Nitish Kumar’s JD-U) or people of Bihar would afraid of it.”

At the present situation, if VIP’s Mukesh Sahani, Lok Janshakti Party (Ram Vilas) Chirag Paswan or HAM’s Jitan Ram Manjhi align with the RJD, it is not a threat for the BJP. The saffron party, however, faces trouble if the JD-U shifts.

Jha was hinting toward Tejashwi Yadav and Nitish Kumar become united in Bihar and that was the concern for BJP.

Veteran RJD leader and national General Secretary Abdul Bari Siddiqui also said: “When BJP realised that our government would be formed in Bihar, they use the CBI as a tool to make us scared but we are not scared of their ploy.”

On his part, Tejashwi Yadav tweeted: “The way of truth and factual means are an Agnipath where walking is hard but not impossible. Delay may be possible but truths always win.

“We are fighting and winning and we will do the same”.

He also wrote a slogan in Hindi: “Ay Hawa Jakar Kah Do Dilli Ke Darbaro Se, Nahi Dara Hai, Nahi Darega, Lalu in Sarkaro se (Go, wind, and tell those of the Delhi Darbar, Lalu has never been, is, or will be not afraid of the rulers).”

RJD state spokesperson Chitranjan Gagan said: “During the raid, Rabri Devi was alone inside the residence. The CBI officials have used inappropriate words against her. It is condemnable that CBI was tried to humiliate her during the questioning.”