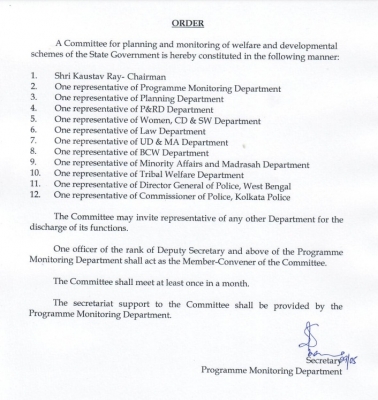 Kolkata, May 20 (Ajit Weekly News) The Mamata government, which is already deep into the West Bengal School Service Commission (WBSSC) recruitment irregularities scam, has another controversy brewing up — silently forming a committee for planning and monitoring of welfare and development schemes and making a local businessman with debated background as the chairman of the committee.

According to a notification issued by the state government on May 8, a new committee has been christened Programme Monitoring Committee for the purpose of planning and monitoring of welfare and development schemes of the state government, and one Kaustav Roy has been made the chairman of the said committee. A copy of the notification is available with Ajit Weekly News.

Kaustav Roy, a Kolkata- based businessman is involved in multiple sectors like computer, software and media. In March 2018, he, as the director of RP Infosystems, was arrested by the Central Bureau of Investigation (CBI) in connection with a Rs 515 crore bank fraud scam involving a consortium of banks, including Punjab National Bank and Canara Bank.

Roy’s appointment created ripples in the political circles here. When contacted by Ajit Weekly News, Roy denied having knowledge of his appointment as the chairman of the Programme Monitoring Committee. “You might have got a copy of any notification. But I do not have any knowledge about being appointed in a state government committee,” Roy said.

Ajit Weekly News contacted the Trinamool Congress state general secretary and party spokesman, Kunal Ghosh. However, he refused to utter a single line on this issue. “I have nothing to comment on this matter,” Ghosh said.

However, CPI-M’s state secretariat member in West Bengal and party’s Kolkata district secretary, Kallol Majumdar launched a scathing attack against the state government on the appointment of Roy as the chairman of the Programme Monitoring Committee.

“A state government, deep into corruption, will obviously recruit someone with a tainted background, to plan and monitor the progress of the state government schemes, which are again marred by multiple complaints of corruption. What else can one expect from this state government?” Majumdar said.

State BJP spokesman, Shamik Bhattacharya told Ajit Weekly News that it is a dangerous trend that now all the bureaucrats and state government functionaries associated with the said committee will be accountable to Roy. “Despite his debated background, he was rewarded for his closeness to the top ruling party leaders,” Bhattacharya told Ajit Weekly News.

Milind Soman returns to music videos after 25 years with 'Shringaar'