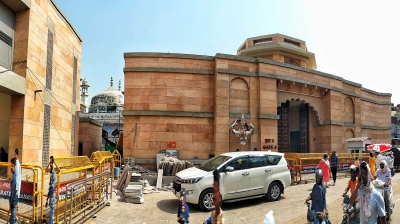 New Delhi, May 20 (Ajit Weekly News) The Hindu parties have told the Supreme Court that Gynavapi mosque in Varanasi is not a mosque, as Mughal Emperor Aurangzeb “did not pass any order to create a waqf over the land in question or for handing over land to any Muslim or body of Muslims”.

The respondents’ response, filed through advocate Vishnu Shankar Jain, said: “The historians have confirmed that Islamic ruler Aurangzeb had issued an order on April 9, 1669 directing his administration to demolish the temple of Lord Adi Visheshwar at Varanasi. There is nothing on record to establish that the then ruler or any subsequent ruler has passed any order to create a waqf over the land in question or for handing over the land to any Muslim or body of Muslims. The copy of farmaan/order issued by Aurangzeb is reported to be maintained by Asiatic Library Kolkata.”

The response argued that a mosque can be constructed over the property dedicated by waqif, who should be the owner of the property and a construction raised under the orders of any Muslim ruler or by any Muslim over the land of a temple cannot be construed as mosque.

“A waqf can be created only on the land dedicated to waqf by wakif who is owner of the land. In the instant case, it is clear that from the time immemorial the land and property belong to the deity and therefore there can be no mosque thereat,” it added.

The respondents claimed that Kashi has faced a number of attacks and the temple of Adi Visheshwar was attacked, looted, and demolished right from 1193 till 1669.

“Adi Visheshwar Jyotirling’ at Kashi is Swyambhu Deity and it is the most ancient out of 12 Jyotirlings established in different parts of ‘Tapo Bhoomi’ Bharatvarsh. The Jyotirlings have great position under Hindu mythology and its importance have been described in Vedas, Purans, Upnishads and Shastras followed by devotees and worshippers of Santan Vedic Hindu Dharma,” it claimed.

The respondents also alleged that the property in question does not belong to any waqf and it had already vested in deity Adi Visheshwara much before the start of the British calendar year and is continuing to be the property of the deity.

Terming Aurangzeb a “champion in destruction of Hindu temples”, it said he issued ‘Farmaans’ in 1669 to destroy many temples including Kashi and Mathura, which were prominently worshipped by Hindus.

“The administration complied with the order and demolished a portion of temple of the Adi Visheshwar at Varanasi and later on a construction was raised which they alleged ‘Gyanvapi Mosque’ but they could not change the religious charter of Hindu temple as the idol of Goddess Shringar Gauri, Lord Ganesh and other associate deities continued in the same building complex,” they claimed.

In connection with the Places of Worship Act, 1991, the Hindu parties contended the court should consider what is the religious character of the place in question was on August 15, 1947, whether it was a place of Hindu or Muslim worship, and whether erecting a super structure can convert a temple into a mosque or vice versa.

The plaintiffs contended that on August 15, 1947 the character of the property in question was of Hindu temple as the images of plaintiff deities and along with other associate deities was there and they were being worshiped.

The plaintiffs’ response has come on a plea Committee of Management Anjuman Intezamia Masajid Varanasi challenging the survey at Gyanvapi mosque. The apex court will consider the matter on Friday at 3 p.m.

On May 17, the top court directed the Varanasi administration to protect and seal the area where a ‘Shivling’ was found during a video survey inside the Gyanvapi mosque complex. However, the apex court also directed the concerned authorities to not restrict Muslims from entering the mosque to offer ‘namaz’.