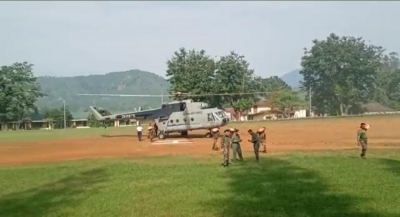 Guwahati, May 20 (Ajit Weekly News) The flood situation in Assam further worsened on Friday, while the death of four more persons, including two children, took the toll to 14 in the current pre-monsoon floods and landslides and over 8 lakh people have been affected in 29 of the state’s 34 districts, officials said.

UNICEF has deployed 7 teams of technical specialists and consultants to support the DDMAs of Cachar, Hojai, Darrang, Biswanath, Nagaon, Morigaon and Dima Hasao in monitoring flood relief camps in accordance with the relief camp management SOPs, assessing ground situation and needs, and supporting relevant stakeholders in strengthening the response activities.

A total of 21,884 stranded persons have been evacuated with the help of disaster response forces and volunteers. In all, 343 relief camps and 411 relief distribution centres have been opened in all affected areas.

A total of 86,772 people are staying in the relief camps.

Over 81,920 hectare of crops have been affected in the ongoing pre-monsoon flood.

The situation in the hill section of the Northeast Frontier Railway (NFR) in Dima Hasao district remained critical on Wednesday as rain continued to batter the area, affecting the Lumding-Badarpur single line railway route, which connects Tripura, Mizoram, Manipur and the southern part of Assam with the rest of the country.

According to NFR’s Chief Public Relations Officer, Sabyasachi De, the Lumding Division, in association with district authorities of Hojai, ran a special train for the relief and rescue of flood-affected people of the district recently. Consisting of three coaches, this flood relief train ran from Hojai to Jamunamukh, carrying food and essential materials for the flood affected people, who were taking shelter in make shift tents beside the railway tracks in the Hojai-Jamunamukh section.