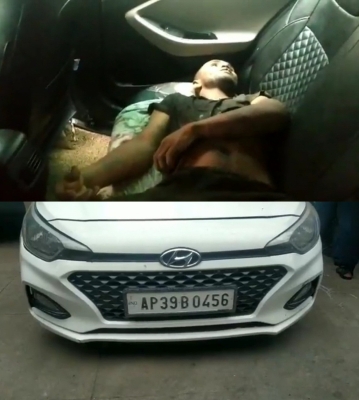 Amaravati, May 20 (Ajit Weekly News) Driver of a legislator of Andhra Pradesh’s ruling YSR Congress Party died under suspicious circumstances but the family alleged that he was murdered and demanded the leader’s arrest.

Member of Legislative Council (MLC) Anantha Uday Bhaskar allegedly came to the driver Subrahmanyam’s house in Kakinada town with his body in the car in the wee hours of Friday. He told the driver’s family that Subrahmanyam died in a road accident.

However, Subrahmanyam’s parents did not believe his version and insisted that the MLC show them the evidence. They alleged that the MLC did not answer them and left the place in another vehicle leaving behind the body along with his car.

The incident triggered tension in the area as the family of Subrahmanyam alleged that the MLC murdered him. They demanded the legislator’s arrest.

The family members said Subrahmanyam had worked as driver to Uday Bhaskar for five years and had recently quit the job. However, the MLC was occasionally calling him for some work. They claimed that on Thursday the MLC took Subrahmanyam in his car and later sent a message to his brother that he died in an accident.

Demanding the MLC’s arrest, the driver’s family along with the leaders of opposition Telugu Desam Party (TDP) resisted attempts by the police to shift the body to hospital. The deceased’s wife Aparna demanded that the police first arrest the MLC. She alleged the MLC killed her husband as he knew many of his secrets.

Senior police officers, who rushed there, pacified the family members of Subrahmanyam and managed to shift the body to Government General Hospital Kakinada for autopsy.

Lokesh alleged that the YSRCP MLC arrived in his car, kidnapped Subrahmanyam and returned only to hand over the dead body around midnight. When family members alerted neighbours, the MLC left his car and the dead body there and vanished from the scene.

Lokesh also demanded a CBI investigation into the murder of Subrahmanyam, who worked as car driver for the YSRCP MLC till four months ago.

The TDP leader strongly condemned the manner in which the police did not even respond when the victim’s parents complained about the ghastly crime. After eliminating the car driver, the MLC Babu and his followers tried to turn the murder into an accident death, he said.

Lokesh deplored that the ruling YSRCP mafia had turned Andhra Pradesh into a state that is more dangerous than Bihar.