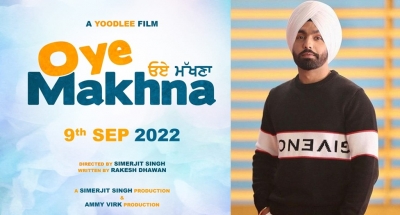 Mumbai, May 20 (Ajit Weekly News) Punjabi actor-singer Ammy Virk is set to headline the film ‘Oye Makhna’ with director Simerjit Singh at the helm of affairs.

The film, a rom-com, also stars Tania Singh, who was last seen with Ammy in the super-hit ‘Qismat 2’.

Commenting on the development, ‘Qismat’ hitmaker Ammy Virk, said in a statement, “I am really looking forward to this film and I think fans are in for a real cinematic treat. This is the biggie that will push the Punjabi rom-com into a new space. Simerjit always knows how to create something special every time we work together and this film is no exception. To connect with a pan-Indian production house like Yoodlee is also a big plus as our reach will increase substantially thanks to them.”

The film is a joint production between Yoodlee Films, (Saregama’s film production studio) and Simerjit Singh Productions in collaboration with Ammy Virk Productions.

Sharing his excitement on the project and the bid to promote regional content, Siddharth Anand Kumar, VP – Films Saregama said, “We are extremely bullish on the regional space in content and believe that the Punjabi Film Industry has much to offer audiences across the world. Simerjit is a wonderful director and he is bringing a lot of his signature brilliance to the film.”

“Also, to have a talent like Ammy Virk headline this project as the lead and as a co-producer makes for a winning combination. Ammy and Simerjit have given some of the iconic Punjabi box office winners of the last 5 years and this one will be one more great addition to the list”, he added.

The film, which also stars Guggu Gill and Sidhika Sharma, will arrive in theatres on September 9.

Director Simerjit added, “Ammy and I have always had a great equation and fans have enjoyed our association and now Yoodlee has brought us together once again. I am sure, this film will be unlike anything either of us has done. I am looking forward to this film and hope that audiences will go in big numbers to watch it on the big screen on 9th September.”