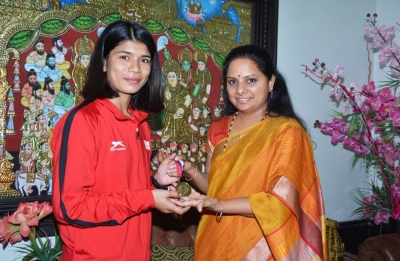 He said he was delighted over the feat achieved by Nikhat, who hails from the state’s Nizamabad district and complimented her for keeping India’s flag high on the international sports platform.

He said that it is a proud moment that Nikhat became the boxing world champion with the encouragement from the state government.

The government is motivating the sports persons in all aspects and is already taking measures to set up rural sports centres in all villages to create young sportspersons in the state, the CM said.

“Congratulations to the daughter of Nizamabad Nikhat Zareen on winning the Women’s World Boxing Championship. We all are proud of you Girl,” she tweeted.