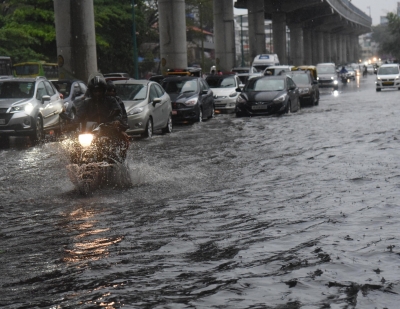 New Delhi, May 19 (Ajit Weekly News) The India Meteorological Department (IMD) on Thursday reiterated that Southwest Monsoon onset over Kerala is possible by May 25.

“Conditions are favourable for further advance of Southwest Monsoon into some more parts of south and central Bay of Bengal and some parts of south Arabian Sea during next two days. Conditions will continue to be favourable for further progress leading to onset of Southwest Monsoon over Kerala towards end of the week,” IMD’s Extended Range Forecast for the week starting Thursday said.

Last week, the IMD had already announced the onset date of SW Monsoon over Kerala on May 27 with a model error margin of plus/minus four days.

Much before its normal date of May 22, the monsoon has reached and crossed Andaman & Nicobar Islands.

Meanwhile, due to strong cross equatorial flow from Bay of Bengal to Andaman Sea in lower tropospheric levels, fairly widespread to widespread rainfall with isolated heavy rainfall and thunderstorm/lightning/gusty winds are very likely over Andaman and Nicobar Islands during the week starting from Thursday till next Wednesday, the duration as per the Extended Range Forecast.

“A cyclonic circulation lies over Gulf of Martaban and adjoining Myanmar extended upto middle-tropospheric levels. Under its influence, a Low Pressure Area (LPA) has formed over the same region on Thursday evening. It is likely to be more marked and move northeast-wards towards Myanmar during next 24 hours,” the IMD said, adding, under its influence, squally weather with wind speed reaching 40-50 kmph gusting to 60 kmph are likely over north Andaman Sea and adjoining east-central Bay of Bengal by Sunday.

“A cyclonic circulation lies over north interior Tamil Nadu and neighbourhood extending upto middle tropospheric levels. It is likely to move northwards during the next two days and become less marked thereafter. A north-south trough runs from central Madhya Pradesh to interior Tamil Nadu in lower tropospheric levels,” the bulletin said, adding: “Under the influence of these systems, fairly widespread to widespread light/moderate rainfall with isolated thunderstorm/lightning/ gusty winds are very likely over Kerala-Mahe and Karnataka during most days till Thursday.”

Scattered to fairly widespread light/moderate rainfall with isolated thunderstorm/ lightning are very likely over Tamil Nadu and Rayalaseema and isolated rainfall/ thunderstorms over rest parts of peninsular India during the week.

Remo D'Souza shares diary with tips on being a 'super hubby'