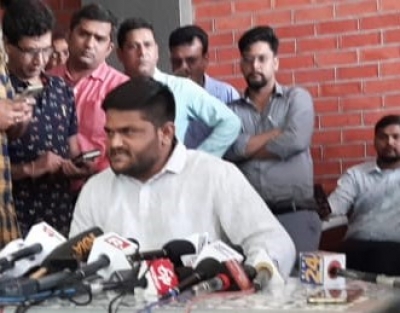 Sources said, it is not just because Vaghela had the support of Hardik Patel during the Youth Congress internal elections, but Hardik had made huge investment for these elections, so that Vaghela can become president.

The other reason is, Vishwanathsinh is associated with the party since NSUI days. In between he had left NSUI and joined ABVP, but he did not find a footing in the ABVP and returned to the NSUI and then to the Youth Congress. Yet, Youth Congress has accepted him whole heartedly.

After the campaign was launched on social media by youth wing members, Vaghela has cleared his stand on social media stating that he is not quitting the Congress. But this has not satisfied the members, sources said.

Reacting to this campaign, Vishwanathsingh told Ajit Weekly News that the campaign was launched by the rival group in the Youth Congress to malign his image, because he is successfully running the organisation and programmes are doing well under his leadership.

“Vaghela needs to reinstate trust and faith in the executive committee and Youth Congress members, that can happen only at the meeting, he has to win the trust of members,” said Pravin Vanol, General Secretary of the Youth Congress.

“Majority members of the youth Congress feel that Vaghela needs to win confidence, as he was closely associated with Hardik, who too was claiming that he will never quit the party and has ditched it now,” said Vanol.

Youth Congress sources said in the recent elections, there was a close fight between Hardik Patel and Indravijaysinh Gohil groups. Gohil’s group got elected to executive committee, but president was from Hardik group. Since then tussle has been going on between the two groups. Indravijaysinh is associated with Congress since NSUI days. He was senate member of the Gujarat University and has expanded the Youth Congress wing across the state, as like Hardik he too is a very aggressive leader.