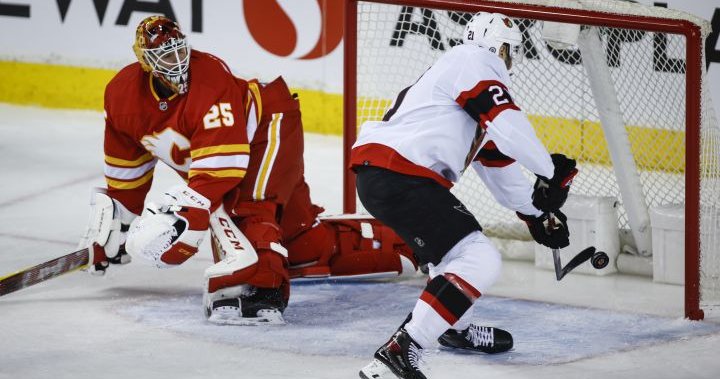 Nick Paul scored twice in the first period and Matt Murray made 27 saves for his first win of the season as the Ottawa Senators defeated the Calgary Flames 4-1 on Thursday.

The Senators were playing their first game since New Year’s Day and just their second in 26 days, but they didn’t look rusty outshooting Calgary 34-28 as they opened an abbreviated two-game Alberta road trip.

Drake Batherson and Connor Brown also scored for Ottawa (10-18-2), which has had 11 games postponed. Their 30 games played is tied with the New York Islanders for the lowest in the league.

The Flames were playing on home ice for the first time since Dec. 11 following postponements caused by a COVID outbreak and capacity restrictions.

With restrictions still in place, the actual attendance was considerably less than the permitted half capacity with far more empty seats than fans.

There wasn’t much for the home crowd to cheer about either with Paul opening the scoring on the first shot of the game less than two minutes in.

A defensive zone turnover along the side boards saw the puck pop out to Alex Formenton, who set up Paul and his wrist shot from 25 feet out went over Markstrom’s glove.

Later in the period, Mikael Backlund had the puck stripped from him by Formenton inside his own blue line and from there, Connor Brown and Paul worked a give-and-go with Paul neatly finishing it off at the 16:37 mark. The tally marked his third career two-goal game and first since Dec. 30, 2019.

Paul was playing centre between Formenton and Brown, with the Senators missing Tim Stutzle, who was added to COVID protocol on Wednesday. Ottawa is also without centres Shane Pinto and Colin White, who are both out with shoulder injuries.

Up 2-0 after 20 minutes, the Senators outshot the Flames 13-6 in the second period, getting the only goal in the final minute on a sharp angle snipe from Batherson.

From the goal line at the side of the net with a small opening above Markstrom’s shoulder as he hugged the post, Batherson sent a perfect shot under the crossbar for his 10 goal.

The Flames got on the scoreboard 47 seconds into the third on Tkachuk’s perfect deflection of Chris Tanev’s point shot.

However, quashing any comeback hopes, Brown restored Ottawa’s three-goal lead on a breakaway at 4:52. Pouncing on a Tkachuk’s errant pass from behind the Senators’ net, he raced away on a breakaway and beat Markstrom through the five-hole.

Defenceman Jacob Bernard-Docker, who hails from the nearby town of Okotoks, Alta., was activated from the taxi squad and paired with Thomas Chabot. Among the family on hand to watch his ninth career game were Bernard-Docker’s parents, who watched him play an NHL game live for the first time.

Scott Sabourin’s first game for Ottawa since Nov, 14 lasted just over a period. He left with an injury after losing a one-sided fight against Milan Lucic.