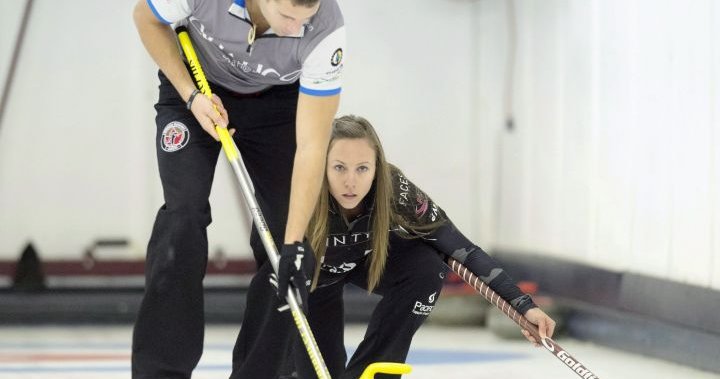 Faced with having to pick an Olympic mixed doubles curling team rather than hold traditional playdowns, Curling Canada put a premium on top-flight experience for its selection.

Having the reigning Olympic champion in the mix for nomination didn’t hurt either.

John Morris and Rachel Homan were chosen Thursday to represent Canada in Beijing as the federation went with the expected and safe pick of two players with loaded resumes.

:We understand the circumstances,” Morris said on a video call. “At the end of the day, when you have an opportunity to wear the Maple Leaf on your back and go to battle for your country to try to get them a medal, that’s something that I relish.

“I just can’t wait for one more opportunity.”

In addition to their Olympic experience, both players have won world titles and are three-time national champions.

Morris, 43, won Olympic gold with skip Kevin Martin at the 2010 Vancouver Games. He also took mixed doubles gold at the 2018 Pyeongchang Games with Kaitlyn Lawes in the discipline’s Olympic debut.

Homan, 32, represented Canada in the women’s team event in South Korea but did not reach the podium. She was replaced by Lawes for the mixed doubles trials after locking up the team berth.

“We wanted to select a highly ranked team with a lot of international experience and a consistent record of winning performance,” said national coach Scott Pfeifer. “I think John and Rachel, with their experience at the Olympics — and John’s especially with mixed doubles — makes them the perfect team to represent Canada in Beijing.”

Homan and Morris have won four of their last six mixed doubles competitions together and 45 of their last 49 games as a duo overall.

Canada will be joined by fellow headliners Sweden, Great Britain, Switzerland, Norway and the United States in the 10-team Olympic mixed doubles field.

Homan has had success in Beijing in the past. She beat Russia’s Anna Sidorova in the final of the 2017 women’s world championship at the Capital Indoor Stadium.

“We’re really excited, we’re grateful and honoured to have Curling Canada put their faith in us,” Homan said. “We take that very seriously.

“John and I are competitors and we’re excited to get together and start training in a few days.”

Homan and Pfeiffer were expected to join Morris this weekend in Canmore, Alta., for an isolated training camp before leaving for China.

Curling Canada consulted with the Canadian Olympic Committee and Own the Podium before making the announcement, which ended a nearly three-week wait for the contending teams.

The nomination process was made more difficult by the fact the top two teams in the national rankings Anna Sidorova Jocelyn Peterman and Brett Gallant and No. 2 Jennifer Jones and Brent Laing were ruled out since they had qualified in four-player events.

Unlike many other curling federations, Curling Canada doesn’t allow curlers to play in both disciplines at the same Games.

Peterman and Jones booked their tickets for Beijing in November by winning the women’s team trials in Saskatoon. Gallant won the men’s title with skip Brad Gushue.

Other pairings believed to be in the mix for selection included third-ranked Nancy Martin and Tyrel Griffith and No. 4 Lisa Weagle and John Epping. Weagle, a member of Jones’s five-player rink, was eligible since she’s listed as an alternate in team play.

She was planning to play the trials with Brad Jacobs, who lost the team trials final to Gushue. Laing, meanwhile, was set to play with Selena Njegovan.

“We are blessed with an amazing pool of mixed doubles players, and I feel nothing but compassion for the curlers who were to compete in the Trials and had that opportunity taken from them by the pandemic,” Curling Canada CEO Katherine Henderson said in a release. “But we are confident that Rachel and John will make Canada proud in Beijing.”

Homan and Morris, both originally from Ottawa, are ranked fifth in Canada but their big-game experience was tough for other teams to match.

“We have John Morris, who’s basically the most accomplished mixed doubles player in the history of curling right now,” Pfeifer said. “Rachel has a ton of experience, both on the world stage and on the Olympic stage as well.

“We were extremely confident that no matter what, they would be an excellent pairing moving forward for this Olympics.”

Back in the day, the families would often get together over the holidays for fun games.

“Being named as a part of the Olympic team is phenomenal,” Homan said. “But then to be able to do it with someone you’ve known your whole life is just another amazing feeling.”

Morris, a three-time Canadian mixed doubles medallist, won silver with Homan at the 2017 national playdowns. They ran the table at the Qualico Mixed Doubles Classic last fall, beating Jones/Laing in the semifinal and Peterman/Gallant in the final.

“I love pressure, I want it,” Morris said. “I love the main stage and I know Rachel is the same. She has a tremendous track record. Is this the way we wanted to be picked? No. We wanted to go to battle against Canada’s best and prove that we were the best team in the nation.

“Under the circumstances, this time it was not possible. I think we’re both very excited to work really hard at getting ready for Beijing and going out and proving ourselves on the ice.”

Homes ‘should be off limits’ for protests: Calgary police chief – Calgary