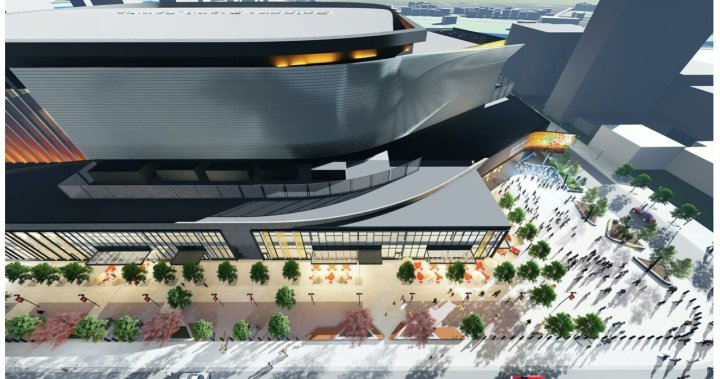 Less than two weeks after the collapse of a deal between the City of Calgary and Flames ownership to build a new event centre, city council is seeking a third party to help find a path forward.

Late Wednesday night, after hours of debate behind closed doors, council unanimously voted to engage with a third party to determine if the Calgary Sports and Entertainment Corporation (CSEC) would be interested in re-entering discussions on building an event centre or if there are other parties interested in partnering with the City of Calgary to complete the project.

Construction on the more than $600 million arena project was set to begin this month, but the deal was formally terminated on Dec. 31, 2021 after CSEC notified the city it was pulling out of the deal due to rising costs.

Mayor Jyoti Gondek told reporters Thursday that a new deal to build an event centre would be a new opportunity for all partners involved.

“What we have before us now is an opportunity to work in this environment with partners and actually strike a deal that is respectful of the fact that the economic conditions are completely different globally, including in Calgary,” Gondek said. “It’s a new opportunity that unshackles us from the old arrangement.”

According to direction from council, the third party intermediary is expected to report back with more information on March 8.

Ward 1 Coun. Sonya Sharp led the charge on bringing in a third party.

“A third party allows for some distance for the city and it’s the best deal for everyone,” Sharp told reporters Thursday. “We can start fresh, without any kind of — I hate to use the word baggage, but that’s really what we need to do here.”

CSEC did not respond to Global News’ request for comment.

Ryan Gauthier, an associate professor at TRU Law in Kamloops B.C., said the retention of a third party isn’t out of the ordinary, but he questioned what the City of Calgary had in mind for other partners joining the fray.

“Are we talking provincial government? Federal government? That might be one thing,” Gauthier said. “If we’re talking a private investor, my question is, what’s the investor going to want out of it? Because if I’m going to put in $20-, $30-, or $40-million into a stadium, I now want naming rights, I want event rights, I want parking (income).”

According to Gondek, “anything is possible” in regards to a private partner helping build and manage a new event centre, including a tenancy agreement.

“Other cities have managed it differently. They’ve also got partners that are responsible for entertainment outside of sports,” Gondek said. “In 2019 we had looked at all kinds of different models, and we will revisit some of those and figure out which one works best for us.”

The Calgary Municipal Land Corporation (CMLC) was removed as development manager of the event centre as part of a revised deal in July 2021, but remains the lead managing the development of Calgary’s entertainment and cultural district on the east end of the downtown core.

But the organization was “disappointed” when it learned the deal between the city and CSEC had fallen through.

CMLC president Kate Thompson said she was still optimistic for the area’s future following the lengthy discussion at city council on Wednesday night.

The event centre, along with the BMO Expansion, Stampede Trail redevelopment, and 17 Avenue S extension were seen as key pieces of the new entertainment and cultural district. Thompson said that work will continue with or without an event centre.

“Would we like to see the event centre move forward? Absolutely,” Thompson told Global News. “If it doesn’t, and we have to think of new things to do in the area, we’ll do that for our council as well.”

According to Thompson, the $500-million expansion to the BMO Centre remains on budget and on schedule.

The Calgary Stampede is also confident in the progress on the entertainment and cultural district, but hopes the city and CSEC can still come together to build the Saddledome’s replacement.

“We’re hopeful (the city) can work something out with the Flames because they and their fans certainly deserve a new venue to play in,” Calgary Stampede CEO Joel Cowley said. “There’s no question an event centre would serve the community well.”

During a virtual press conference on Thursday, Gondek was asked whether she or Flames ownership terminated the deal on a Dec. 21 phone call with Flames majority shareholder Murray Edwards.

“No mayor, including myself, has the ability to negotiate on behalf of council or the City of Calgary and no mayor has the ability to terminate a deal,” Gondek said. “The end of that conversation on Dec. 21 resulted in both myself and Mr. Edwards agreeing that we would be very public about the situation that he and his partners found themselves in.”

As the city plans to forge ahead with the project, Gondek said it is too early to determine if a new deal would mean more or less of a financial commitment from the City of Calgary.

The recently terminated agreement saw a total contribution from the City of Calgary of $323 million, which didn’t include the value of the land.