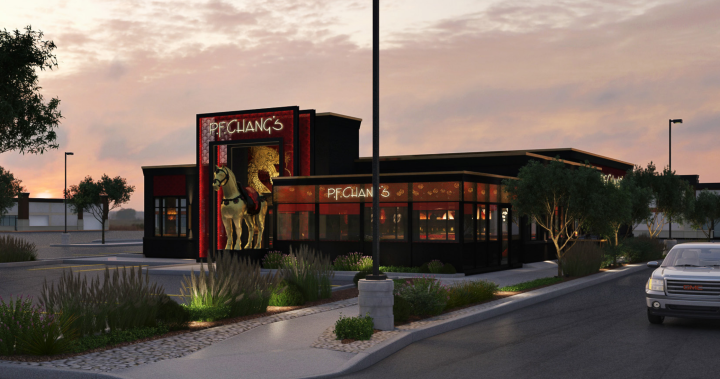 The eatery will take over a stand-alone building in the Currents of Windermere shopping complex that used to be a Swiss Chalet restaurant.

“Set to open in early 2022, the innovative restaurant will bring P.F. Chang’s signature menu, a memorable environment, including an enclosed patio area, and iconic murals and statues to residents of Edmonton and beyond,” a news release said.

While the restaurant’s roots are in Chinese cuisine, the company says its menu spans across all of Asia, with dishes from Japan, Korea, Thailand and more.

Some of the made-from-scratch favourites include Chang’s spicy chicken, Mongolian beef, Chang’s lettuce wraps and sushi, as well as cocktails and desserts, the company said.

1:59
2022 Edmonton Chinatown Dining Week has some restaurant owners optimistic of boost in business

Bringing the restaurant to Edmonton is local franchisee group Fusion 8 and Harvard Developments — the developer for much of the retail space in southwest Edmonton’s Windermere and Ambleside areas, including the Currents of Windermere, the adjacent Windermere Crossing and nearby Shoppes at Windermere South.

“We are very pleased to welcome the world-renowned P.F. Chang’s to Currents of Windermere,” said Tony Prsa, vice-president of Alberta for Harvard Developments.

“We are thrilled that they have chosen our development for their first location in Alberta, and we know that this will truly be a one-of-a-kind culinary experience that will attract visitors not only from our city but our entire province.”

Man in wheelchair making Edmonton accessible one bar at a time

It’s the third location in Canada for the company, which also has restaurants in Winnipeg and Montreal. Worldwide, P.F. Chang’s has more than 300 restaurants in 23 countries.

The exact date of the restaurant’s opening in Edmonton was not disclosed, but updates will be posted to Facebook and Instagram.

It’s one of several American eateries to expand into the area.

Last year, it was announced California Pizza Kitchen — or CPK, as it’s known by fans and employees alike — was expanding into Canada and its first location would be in Edmonton’s Windermere area.

That restaurant will be located in the same part of the shopping complex as P. F. Chang’s.

Construction on the CPK property began in October, and as of January is still ongoing.

Bringing CPK to Alberta is longtime restaurateur Samira Shariff, who at one point owned four Boston Pizza locations in the Edmonton area, and her son Naheed Shariff, a businessman who owns half a dozen Browns Socialhouse locations in the city and in St. Albert.

“In anticipation of the opening next year, we’re extremely excited to take the first step in bringing California Pizza Kitchen’s first franchise in Canada to life,” Naheed Shariff said back in October.

He added they anticipate the restaurant creating about 100 food and beverage industry jobs.