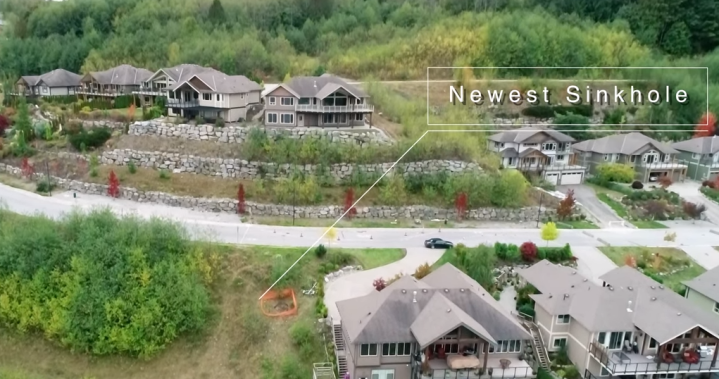 Some residents forced from a Sunshine Coast subdivision nearly three years ago are celebrating a small victory, though there’s little hope the issue that displaced them will be resolved quickly.

The District of Sechelt issued a local state of emergency in February 2019 and ordered residents of a dozen homes to evacuate the Seawatch subdivision after erosion and sinkholes made the Porpoise Bay community unsafe.

The province has since extended that state of emergency 138 times.

Neighbours Carole Rosewall and Gregory and Geraldine Latham took the province to court over the repeated extensions, arguing “government action has cast them into a state of limbo.”

On Tuesday, a BC Supreme Court judge ruled that the province must compensate the two families nearly $200,000 for accommodations and other expenses accrued since then.

Justice Geoffrey Gomery ruled that while the initial state of emergency was justified, its repeated and indefinite extension was not.

“In this case, the continuing renewal of the (state of local emergency) has provided an excuse for inaction on the part of the District and the Province,” Gomery ruled.

“It seems that there has been no incentive for anyone to take steps to address the geotechnical instability of the subdivision while it remains the subject of a (state of local emergency) and under an evacuation order.  Nor have steps been taken to decommission the subdivision.”

Concerns about sinkholes in the area have stretched back for more than a decade but escalated in December 2018 when a new sinkhole opened on Christmas Day, and an engineering report recommended the “precautionary closure” of the neighbourhood, warning of serious risks.

Many displaced residents have now been left in the difficult position of paying rent on a new home while still on the hook for a mortgage for their unlivable properties.

Properties in this Sechelt, B.C. neighbourhood were once worth over $1M. They now cost $2

“In a nutshell you’d call this three years of suffering. There’s been expenses, losses, increasing damages I suppose, and they increase daily,” said former resident Rod Goy, who is involved in a separate lawsuit against the District of Sechelt and the province over the issue.

“We haven’t heard one word from the district of Sechelt or the province of British Columbia since this all took place.”

The law firm representing the two homeowners in their successful court case is now pressing the province and the District of Sechelt to sit down with homeowners and negotiate a fair settlement to avoid what otherwise looks like years of wrangling in court.