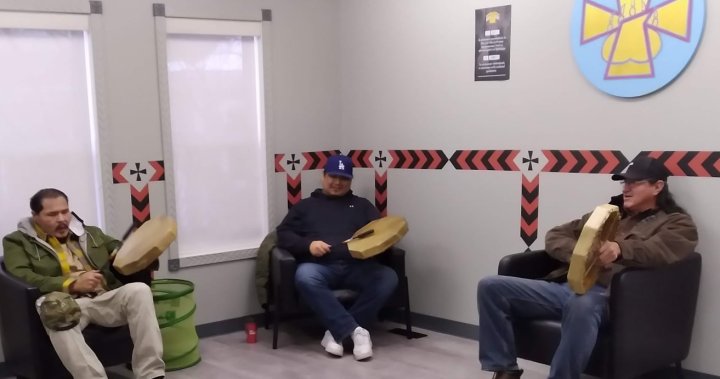 A Lethbridge-based pilot program focusing on addictions recovery is being extended for another year thanks to federal funding.

The Indigenous Recovery Coach Program connects clients with their Blackfoot culture by holding ceremonies and meetings between coaches and participants while also conducting outreach in the community.

“For the first time, they’re able to see what the traditional recovery aspect looks like and, alongside recovery, who they are as people,” Indigenous recovery coach Cherie Shot Both Sides said.

“Giving a sense of pride and a sense of community,” Garrett Standing Alone added.

Garrett Standing Alone has been a coach since the pilot began back in 2017 and sees the First Nation-led recovery method as something other organizations can’t provide.

“Bringing traditional values into recovery. Bringing them back into what it is to be Blackfoot, why we’re here, why we’re on this land,” Standing Alone said.

The program currently serves 74 people with roughly 10 clients per coach.

Each coach is Indigenous, which Standing Alone believes creates an instant connection with his participants and speeds up the recovery process.

“It’s faster, it’s easier and the trust there is good,” he said.

“You’re not taking so long to build a rapport, because a lot of us know the individuals.”

Now, after receiving funds from the Urban Programming for Indigenous Peoples program, the coaches will continue their work in an area they believe is essential and growing more important.

“We’re seeing such a rise in overdoses and us being able to reach out for an additional year will just have a greater impact on those looking to recover,” Shot Both Sides said.

Through the first ten months of 2021, there were 1,247 opioid-related deaths in Alberta including 51 in Lethbridge.