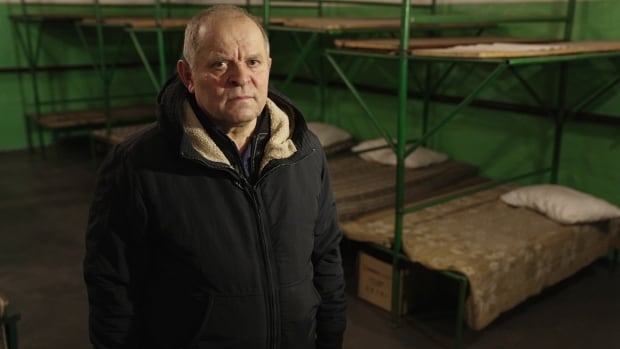 Beneath an administrative building in Kyiv, a concrete stairwell leads down to a thick metal door — the entrance to a bomb shelter from the Cold War era. It’s just one of the hundreds of shelters city officials are inspecting in case the simmering conflict in Eastern Ukraine boils over into a full-scale Russian invasion.

“Our goal is to have shelters for 100 per cent of our population,” said Nikolai Budnik, the manager of the city’s shelter system, as he gave CBC a tour on Monday of a bunker built in 1986.

Because of the recent escalation in tensions between Ukraine and Russia, he said, authorities are inspecting the shelters and replenishing the supplies stored inside, such as gas masks.

While Russian officials have denied they are planning an offensive, U.S. and Ukrainian intelligence sources estimate that around 100,000 Russian troops are amassed near Ukraine’s border with Russia.

A series of high-level diplomatic talks are underway to try and ease the escalating tensions and avert the risk of war.

The particular shelter CBC visited this week is equipped with old bunk beds and water tanks and is meant to accommodate essential workers to keep the city running and utilities operating in the event of an attack.

Russia has issued a series of demands and repeatedly warned about the dangers of crossing its so-called red lines, moves by the West with regard to Ukraine that would trigger a response from Russia. It has warned, for example, that Ukraine should never be permitted to join NATO, although the U.S. has already called that demand a non-starter.

Officials on both sides have expressed doubt that the diplomatic talks will lead to a breakthrough, but that doesn’t mean all Ukrainians think a larger war is imminent or even likely.

‘Not the Ukraine of six or seven years ago’

In the historic neighbourhood of Podil, in Kyiv, crowds wandered through a holiday market Monday. Some sipped mulled wine, and others took a ride on a ferris wheel.

“Ukraine now, it’s not the Ukraine of six or seven years ago … we have a strong army now.”

Ukraine has been developing its military in recent years with the help of allies, including the U.S. and Canada. In 2021 alone, the U.S. provided $400 million in military assistance to Ukraine, and Canadian troops have been helping to train the country’s soldiers as part of Operation UNIFIER.

A war between Ukrainian forces and Russia-backed separatists in Eastern Ukraine has been grinding on since 2014, killing an estimated 14,000 people. But, about 750 kilometres away in the country’s capital, Dalko says there are few signs of a looming threat.

Volodymyr Korniienko, 27, was among the crowd at the holiday market.

He doesn’t think Ukraine will be allowed to join NATO for years but that eventually, it is going to happen and says Russia should just accept it.

He says he also isn’t anxious about the apparent political stalemate.

“I am pretty sure that no kind of military escalation will happen from the Russian side,” he said.

“Even if Russia invades Ukraine, that will not make any sense in an economical way.”

He is referring to the punishing new sanctions that the U.S. and NATO have threatened to levy if Russia launches an attack. Officials have hinted the sweeping measures could include financial sanctions that could target Russian holdings abroad, which would be a blow to the country and particularly the ultra-rich elite who have foreign investments and bank accounts.

“They depend a lot on this,” said Illia Ponomarenko, 29, a defence journalist with the Kyiv Independent, an English-language news site.

“Our enemy is evil but not stupid. They always need their billions in the West. They enjoy the villas in southern France.”

He used to work for the Kyiv Post, Ukraine’s leading English-langauge newspaper, until the owner abruptly fired all of the paper’s staff in November. He and some of his colleagues banded together to launch the Kyiv Independent.

Ponomarenko, who is from the Donbas region in Eastern Ukraine, says he’s seen three wars and two revolutions in his life. So, he feels less anxious about the situation now than he did last spring, when Russia also amassed troops near Ukraine’s border.

“That was a real doomsday atmosphere here in Kyiv. I must admit that I was scared. I was really scared.”

Now, he says, he’s less emotional. If Russia wanted to seize all of Ukraine, it would have tried back in 2014 when it annexed Ukraine’s Crimean peninsula, he said.

He suspects the war talk this time is more of a psychological campaign by Russia to maintain influence.

Ponomarenko says the more Ukraine tilts to the West and develops its democracy and civil liberties, the greater chance Russian residents will take notice.

“They will start questioning … ‘if Ukrainians can do it, why can’t we do it, too?'”