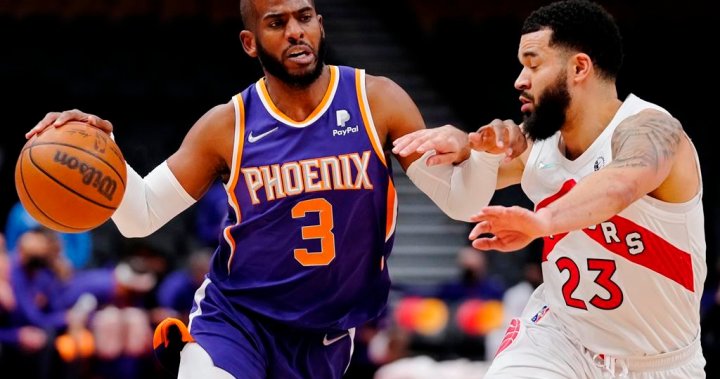 TORONTO – It took a good game by one of the league’s best teams, playing at full strength, to end Toronto’s six-game winning streak.

And that had the Raptors looking at the positives on Tuesday.

OG Anunoby had 25 points, and Pascal Siakam added 22, but the Raptors dropped a 99-95 decision to the league-leading Phoenix Suns, in a game that went down the final seconds.

“You just got to appreciate the fight, be proud of the fight,” said Fred VanVleet. “That was a really intense, tough game, That’s probably as good as it gets without a crowd in there. (The Suns) certainly raised their level, there’s a reason why they have the best record in the NBA, it’s because they play that way every night.

“I thought that we answered the call. I thought it was a good test for us.”

A day after he’d been named Eastern Conference player of the week for the first time in his career, VanVleet finished with 21 points. Chris Boucher hauled down a game-high 16 rebounds to go with 13 points for the Raptors (20-18), who were missing a pair of starters in rookie Scottie Barnes (knee soreness) and Gary Trent Jr. (ankle).

“Played ’em tough,” said coach Nick Nurse. “It was a physical game, kind of slow-paced and grinding, I thought they were definitely trying to out-physical us and we hung in there really good. I thought we handled it well, and actually played really physical ourselves.

“It could probably have gone either way, really.”

The game was so intense that Suns’ guard Devin Booker got angry at The Raptor mascot, the only fan in the building, in the dying seconds. The Raptor waved his arms and kicked a leg when Booker was at the free-throw line and the game still undecided. Booker threw his arms in the air in anger and complained loudly to the referee.

“We hashed it out. We cool now,” Booker said about Toronto’s mascot after the game.

It was the first time since the start of the Raptors’ win streak that Toronto faced a team at full strength; virtually all their opponents in their six-game winning streak had been missing their best player. Plus, the Suns arrived in Toronto tied with Golden State for the league’s best record.

Did the Raptors feel they proved something in the narrow loss?

“Hundred per cent,” said Boucher, who celebrated his 29th birthday Tuesday. “We didn’t have Scottie, we didn’t have Gary, those are two big pieces for us but we hung in there. We didn’t shoot the ball well (21.6 per cent from three-point range), there’s a lot of things that didn’t go our way, but we still figured out a way to stay in the game. That’s just going to give us confidence.

“We need to play like that against everybody, not just against the good teams.”

The Raptors led by 11 early on, but the Suns rallied to retake the lead in the second quarter and it was a see-saw affair the rest of the way.

The Raptors led by two to start the fourth, then a basket by Precious Achiuwa capped a 7-0 Raptors run that had them up by five with 9:01 to play. But back-to-back threes by Crowder and Mikal Bridges punctuated an 8-0 Suns run for a six-point Phoenix lead with 4:12 left.

Anunoby drilled a three from the corner, then connected on a pair of free throws for a one-point Raptors lead with 1:41 to play. But baskets by Booker and Paul gave Phoenix a three-point cushion with 31.1 seconds on the clock. The Raptors couldn’t get a shot off from behind the arc, so Anunoby drove to the hoop for a two-pointer with 14.1 seconds left, Toronto’s final field goal of the game as the teams traded free throws over the final few seconds.

VanVleet said Phoenix’s attention to detail made it feel like a playoff game.

“Sometimes the difference is just not falling asleep, they didn’t really fall asleep much, they were pretty locked in, there was always one guy shadowing me, knowing where I was at,” VanVleet said. “So, that’s usually what the playoffs look like … so it’s good for us to see what that’s like, and kind of adjusting and adapting and keep working on our half-court offence.”

It was the Raptors’ sixth game without a crowd at Scotiabank Arena due to the Ontario government’s crowd restriction amid the latest COVID-19 surge.

The in-game entertainment remains largely the same. Announcer Herbie Kuhn hollered at non-existent fans to vote VanVleet into the all-star game, and later, encouraged them to celebrate VanVleet’s NBA player of the week honours. Even the giant inflatable Raptor made an appearance.

VanVleet led the way with 10 points in a first quarter that saw the Raptors settle down after a shaky start. They went up by 11 points then led 31-23 to end the quarter.

A running dunk by Bridges capped a 17-4 Suns run that put the visitors up by a point late in the second quarter. The Raptors replied with a mini 8-1, then took a 48-46 advantage into the locker-room at halftime.

Neither team led by more than three points in the third, and the Raptors were up 71-69 to start the fourth.

The Raptors play the next five games on the road, opening Friday at Detroit. They’ll visit Milwaukee, Miami, Dallas, and Washington before returning home to host Portland on Jan. 23.

This report by The Canadian Press was first published Jan. 11, 2021.