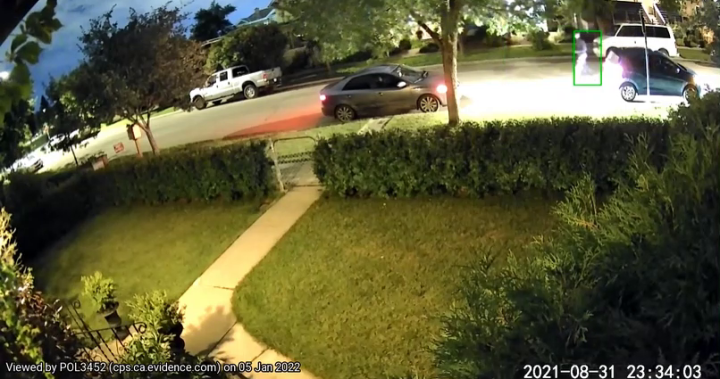 Calgary police are looking for help to identify suspects and a “suspicious vehicle” in connection with the theft of another vehicle and a shooting in August 2021.

Investigators believe the suspects were caught on CCTV moments before the vehicle was stolen.

A female suspect is described as having a medium build, wearing black or dark-coloured runners, leggings, a baseball cap and a hooded sweater.

Police believe a third individual aided in the car theft. The person was sitting in a parked, dark-coloured SUV or van in the 200 block of Patterson Mount S.W. at the time of the theft, police said.

CPS also believe those who stole the Spark may have information about an Aug. 19, 2021, shooting in Crescent Heights.

On that Thursday evening, police responded to calls of reported gunshots in the 200 block of 11 Avenue N.E. Police found evidence of a shooting and a man suffering from an apparent gunshot wound.

Investigators identified two vehicles they said were in the area during the shooting: a silver Nissan Versa and a turquoise Chevrolet Spark.

“We now believe that the occupants of the Chevrolet Spark during the… (11 Avenue) shooting may be the suspects wanted in the vehicle theft and may also have information about the Crescent Heights shooting,” a CPS statement issued Tuesday reads.

Police received footage of what appears to be the stolen Spark being abandoned in Renfrew on Aug. 31, 2021. CCTV footage shows an individual exiting the Spark.

That vehicle was later confirmed as the stolen vehicle and returned to its owner.

Police are asking for anyone with information about the car theft, the two individuals suspected of stealing the car, the individual who left the Spark, the dark-coloured SUV/van or the shooting in Crescent Heights to call police at 403-266-1234 or contact Crime Stoppers.