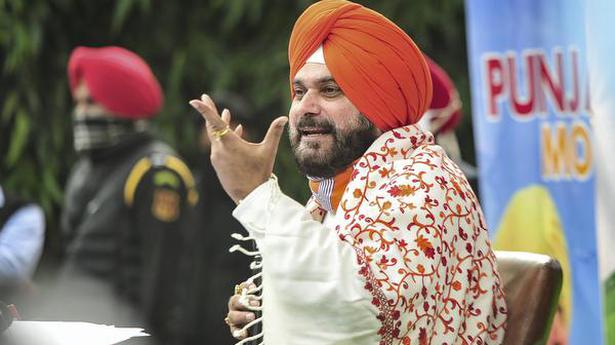 Even as the Congress party has promised to fight the upcoming Assembly elections in Punjab under a ‘collective leadership’, the absence of Chief Minister Charanjit Singh Channi and former party State president Sunil Jakhar’s photographs at PCC chief Navjot Singh Sidhu’s presser on Tuesday indicates fissures in the party remain.

At the press conference, Mr. Sidhu launched his ‘Punjab Model’ that according to him would bring power back in the hands of people.

Interestingly, Mr. Sidhu launched his ‘Punjab Model’ even as Ms Gandhi set up a ‘manifesto committee’ for the Punjab elections. Mr. Sidhu said his Punjab Model was formulated in consultation with the party’s Punjab affairs general secretary.

Unveiling policies on liquor, sand mining, cable TV, transport etc., Mr. Sidhu asserted that the State and its people should wake up to the possibility of change and unravel the potential of the schemes announced by PCC. This time, people will elect their Chief Minister on based on the futuristic agenda, he said, adding. “These changes will transform the landscape of the people and lead us to a prosperous Punjab.”

He said the aim is to utilise the State’s resources to the maximum and generate maximum revenue possible so that same can be invested in the development of people.

Mr. Sidhu’s launch came days after Mr. Jakhar stated that before going and convincing the public of the benefits of his ‘Punjab Model’, Mr. Sidhu should first convince the party and get it adopted by the party, and not just go ahead with it as an ‘individual’s’ model.

Congress spokesperson and national general secretary Randeep Singh Surjewala had recently stated that Mr. Channi, Mr. Sidhu and Mr. Jakhar will together lead the party in Punjab for the upcoming election.