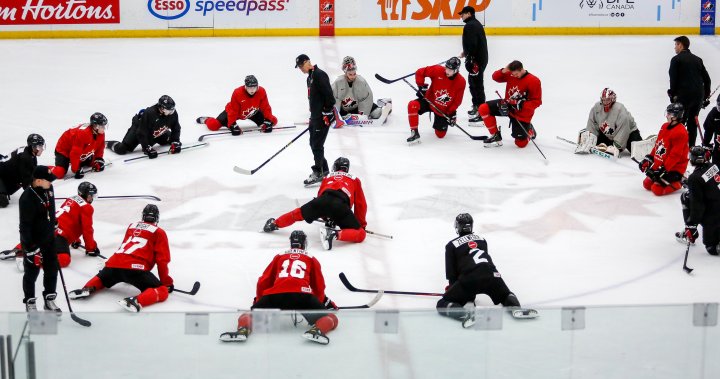 If they knew it would be their final game as a team, maybe they would have stayed on the ice a little longer.

Riding high on a historic four-goal performance by 16-year-old Connor Bedard in an 11-2 beatdown of Austria, Team Canada players had no idea what discussions were going on behind the scenes as more COVID-19 positive cases among athletes and staff were detected.

More than ten days later, Team Canada is scattered across the country, still shocked by the abrupt cancellation of the tournament.

“All the guys still reach out to each other and just wonder what could have been.”

Focused on the Dec. 29 matchup against Germany, the group had wrapped up their morning skate and returned to their hotel for a pre-game nap before phones started buzzing, asking the players to gather for an emergency meeting.

Word of the tournament’s cancellation was met with stunned silence.

“There were some tears… All the guys were devastated,” Captain and Sherwood Park product Kaiden Guhle said. “That was the last time we were going to be a team together.”

Ten players from seven countries and one on-ice official had caught COVID-19 at that point.

As if cutting his gold medal quest short wasn’t enough, Guhle was informed he was a close contact with a positive COVID-19 case at the tournament and would need to isolate.

Coronavirus cases across the WHL have now shut down several teams, including Guhle and Neighbours’ Edmonton Oil Kings, for the time being.

Neighbours hasn’t been on the ice since that fateful pregame skate — which might not be a bad thing.

“These couple of days that we’re postponed was a good little pause for me to kind of reset,” Neighbours admitted.

“I know, some of the other guys as well, just with how upset we were at the cancellation of the tournament, it’s been good to have some time off a little bit here and just reset the body and the brain.”

Yesterday, we were set to air a story about lifelong friends + 🇨🇦 teammates Jake Neighbours and Ronan Seeley. This isn’t how the piece would’ve turned out had the #WorldJuniors continued but it feels worth sharing part of their story and the joy they’ve found at the Seeley’s ODR. pic.twitter.com/pPawGXYL8s

The IIHF is trying to find a way to resurrect World Juniors later in 2022 — potentially during the summer months — with all athletes returning for a shot at a medal.

While players say they’d be eager to return, understandably, they also don’t want to get their hopes up.

“I’m sure while the season is going on there’s going to be more rumours about if it’s going to happen, and if it’s not,” Guhle shrugged. “I’ll just focus on the Oil Kings right now but I mean, still going to be preparing for the World Juniors until it’s for sure a no-go.”

If anything, the waves of disappointment have added a new layer of toughness to the 6’2 Montreal Canadiens prospect.

“Everyone in this generation these past couple years has had to deal with some type of tough news at some point. I think everyone’s got to deal with it their own way,” Guhle explained.

“Something that I’ve definitely improved on is dealing with that kind of stuff and getting some things taken away from you and keeping the positive attitude as much as possible and hoping things are going to work out in the end.”

The pair say they also want to see the cancelled Women’s U18 world championship- along with five other IIHF events- rescheduled.

“It’s important for them to play,” Guhle added.

“Women’s hockey is very important and people are making more light of that. I think it’s unfortunate their (tournament) got cancelled and hopefully, we can go out or we could start up again with them in the summertime and they get a tournament and we do as well.”