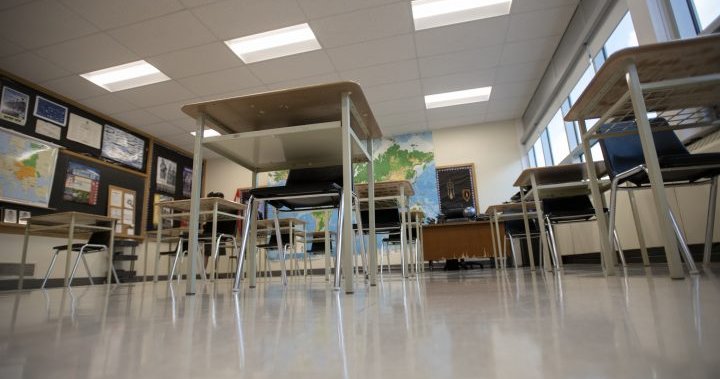 Twelve-year-old Charlie Kozak wasn’t feeling safe about having to be in class today.

“It’s a chaotic mess,” Charlie said during a phone interview from his home as he prepared to return to his school in Calgary.

“I know some people in my class travelled out of country over Christmas break. Some people have done unsafe family gatherings. We’re allowed to take masks off at our desks next to them (that) aren’t six feet apart.

While some parents are relieved that students in Grades K-12 are returning to classes after an extended holiday break, many say they are concerned and frustrated about unclear instructions from the Alberta government on how it plans to contain a surge in COVID-19 infections in classrooms caused by the Omicron variant.

The province had an almost 40 per cent positivity rate last week. Education Minister Adriana LaGrange has promised thousands of test kits will be delivered to students and parents over the next few days, but has left it up to schools to report and track infections.

Dr. Deena Hinshaw, chief medical officer of health, has said a return to in-person learning is critical and necessary for students’ mental wellness.

“We know the COVID infection has a low — but not zero — risk for children. We also know in-person learning is critically important for many kids’ educational and social development and provides a sense of stability and normalcy in these challenging times,” she said last week.

Charlie’s mother, Dr. Stephanie Cooper, an obstetrician, said she agrees mental well-being is worsening among students, but “mental health is not just about being online or in-person.”

“There’s a lot of other variables that include the stress of not feeling like you have all the information.”

She pointed to a promise made by LaGrange that students will go back to classes with more medical masks.

Schools have received their masks and test kits, but Edmonton Public Schools and the Alberta Teachers’ Association have said there are still kids who won’t get them until days after they return to classes, which could exacerbate the spread of the already highly contagious variant.

‘They’re going to take off their masks and eat in a classroom for the lunchtime period,“ she said. ”None of this makes any sense. Certainly, a lot of parents are left with a lot of questions as to the logistics of how this is going to happen.“

“I don’t have the best mental health either but I feel like COVID wasn’t the thing that affected that,” Charlie added.

“It was the constant fear of what if I get COVID and then someone else gets it? It’s (would be) my fault that I put someone in hospital because I wasn’t careful enough at school, because someone didn’t want to wear a mask.”

Wing Li, an Edmonton-based parent and a volunteer with advocacy group Support Our Students Alberta, said she will continue tracking outbreaks in schools since the government has stopped contact tracing.

Li said she is able to keep tabs on infections because parents forward letters to her sent by schools reporting an outbreak.

She said she has heard from parents who are relieved their kids are returning to school because they don’t have the resources to keep an eye on them and work at the same time.

“I think the narrative is sold that some of us want to shut the school down, but that’s not the case at all,” Li said.

“We just want safety measures so that it’s not a complete disaster.”

Edmonton Public Schools has written a letter to the United Conservative government saying that despite the extension to winter break, “our concerns with staffing and division operations have not changed.”

The school division along with the Calgary Catholic School District have said they are anticipating to once again scramble to find teachers to fill in for those who can’t come in because they are sick.

“We’re just even more exhausted every year that this drags on,” Li said. “We know that we have to maintain normalcy for the kids when it hasn’t been normal for us at all.

“Not having any support adds to that exhaustion and feeling abandoned by policy-makers.”