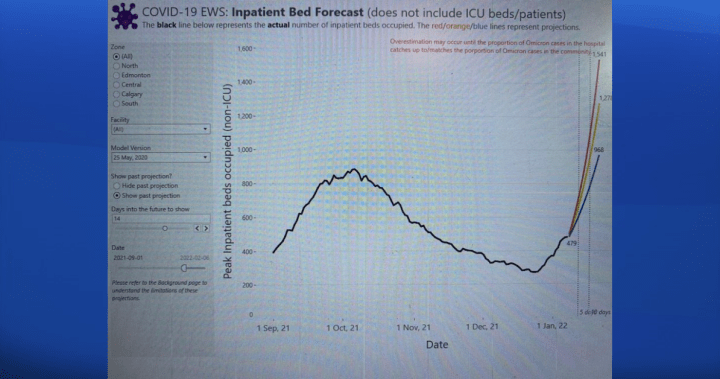 With COVID-19 case counts continuing to rise at a rapid rate, a leaked Alberta Health Services memo states it has started to ask for both unionized and non-union nurses to volunteer for redeployment.

Though the call for redeployment has taken place in the past, the reason behind this call for volunteers — just over a week into the new year — is attributed to the highly transmissible Omicron variant, which shows no sign of slowing down.

2:34
What will happen as more COVID-19 patients fill Alberta ICUs?

In Friday’s COVID-19 update, the province broke another record in active COVID-19 cases since the pandemic first began, with 43,414 Albertans with the virus.

However, as previously said by Alberta’s chief medical officer of health, Dr. Deena Hinshaw — the number of active cases is likely much higher due to the province no longer offering PCR testing for everyone with COVID-19 symptoms.

In an email sent on Friday to Global News, AHS said along with “looking at redeployment as part of our planning to meet demand caused by the Omicron variant,” some staff members have remained redeployed to the intensive care units following the fourth wave.

‘It’s scary’: Nurse explains what it’s like to be redeployed to the ICU during COVID-19 pandemic

The memo highlights that AHS will be expanding the number of staff it has on standby not only for areas that deal with pandemic-related care, testing and immunization — but also for regular clinical and clinical support settings.

First Vice President of the United Nurses of Alberta, Danielle Larivee calls the current COVID-19 situation in the province “terrifying.”

“Sadly, we’re not surprised. This isn’t the first wave where we didn’t know anything about COVID. ​We knew that it was coming,” she told Global News.

“There were many people, including UNA, that were sounding the alarm before Christmas that exponential growth was starting, that other jurisdictions were struggling and that we needed to take this seriously and take some really strong action to protect Albertans and to protect our health care system.”

Larivee went on to say the province was already facing staff shortages at the beginning of the pandemic in health care and that now they’re “in a crisis” especially in rural Alberta centres where there just aren’t enough staff to keep up with sick days, COVID-19 isolation or even a day off.

“Things were bad in in the fourth wave, there was already forms of triage that were​ happening where people weren’t getting the care that they needed. And it seems that we’re headed that way again.”

The forecast shows only hospitalization numbers. Intensive care unit numbers are not included.

There is no reserve left.
We are exhausted.
I spent today struggling to find beds for patients who require admission. In the span of a few days it already feels like we are back in the trenches and the peak hasn’t even started yet. https://t.co/sXthhdO846

In an email sent to Global News, AHS said it’s constantly monitoring current and future demand on the healthcare system, including the growth in COVID-19 cases. The graphic shown is just one tool the organization uses to predict hospitalization and ICU numbers, to help plan for changes.

“Plans are in place to increase acute care capacity, with appropriate staffing and resources should it be needed,” an AHS spokesperson said.

“The current projected need can be met.”

In a statement sent to Global News, Gil McGowan, president of the Alberta Federation of Labour, said the leaked modelling projection shows Alberta’s health care system is about to be overwhelmed “by a combination of increased hospitalizations and staff shortages, both caused by the unprecedented transmissibility of the Omicron variant.”

“It’s bad enough that the Kenney government would keep this critical information from Albertans; it’s even worse that they seem determined to [do] nothing about it,” McGowan said.  “Their ‘let-it-rip’ strategy is nothing short of willful negligence.”

Meanwhile, an Alberta Health spokesperson said it’s too early to know the full impact the Omicron variant has on Albertans, but that it’s responding with caution based on what it’s seeing in other jurisdictions.

“While it seems that a smaller percentage of cases in other places are requiring acute care, a large number of people infected will soon translate into a greater number of people in hospital. As to how high these numbers will get, it’s too soon to tell,” Alberta Health said.

“No model can exactly predict a given epidemic curve, especially when so many factors are changing. The AHS internal forecast is a projection from the latest data, and it changes constantly with the data,” the spokesperson explained.

“At this point it shows higher non-ICU admissions than we’ve seen before but relatively lower ICU admissions, in line with experience elsewhere. The forecast shows a wide range of potential changes, reinforcing the point that it’s too soon to know what the impact of Omicron will be.”