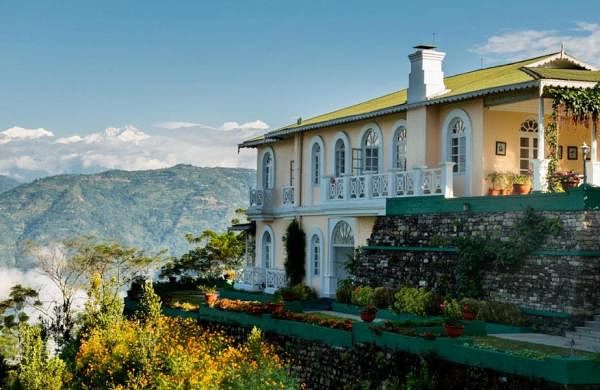 What makes the perfect blend? Take a 150-year-old plantation in the foothills of eastern Himalayas. Kanchenjunga peaks tower over tea bushes. To that add two snow-fed rivers running through thus as well as the surrounding reserve forest. All with a choice sprinkling of crisp mountain air, fresh rain, the sunlight, the soil and the welcoming smile of the Glenburn family. Yes, you couldn’t ask for a better cuppa!

Following the course of the river Teesta and located across 1,500 acres in the Dooars region on the outskirts of Darjeeling town, this 150-year-old tea plantation is, well, famous for its brew, but what it is equally famous for are its two beautiful bungalows.

Overlooking the plantation, flower-filled gardens and boasting a magnificent view of the Kanchenjunga, these impeccably refurbished old planters’ homes, now run as a boutique hotel, are the labour of love of owner, Husna-Tara Nanda Prakash, who has spared no effort to bring them back to their former glory.

First, a bit about Husna-Tara, then we’ll proceed to her heritage home. Born and brought up in England, she spent eight years of her childhood at a boarding school in India. She returned to England at 16 to complete the International Baccalaureate Diploma in Oxford.

Then, during a gap year backpacking around the world, she happened to meet Anshuman Prakash, a fourth generation tea planter. Six years later, after a Natural Science and Post Graduate Certificate of Education degree at the University of Cambridge, she returned to India to marry Anshuman around 1999.

After two years on their tea plantation in Kerala, where tourism was booming, Anshuman and Husna-Tara conceived the idea of opening up their North Bengal tea estate to visitors, a bit like the vineyard experience in other parts of the world.

For this, Husna-Tara gives credit to a chance meeting with Austria-born Delhi-based interior designer Bronwyn Latif. “In her very first visit to Glenburn, she instantly knew it was gem that needed just a little polishing to sparkle again,” she recalls.

Work started on the Burra Bungalow first, by removing layers of paint and plywood to reveal beautiful old, burnished wood, and then by refurbishing the classic colonial furniture with fresh polish. The reinvented bungalow started life as a bespoke boutique hotel in 2002, and eight years later, it was the turn of the second homestead, Water Lily bungalow, to get a facelift and four fresh rooms.

Indeed, if ever there is to be a lesson on how to decorate a plantation bungalow, it is right here. Fresh flowers, wicker outdoor furniture, pastel walls, custom-designed upholstery, hand-embroidered linen, floor to ceiling drapes, pretty rugs and throws, and beautiful art work all come together in a pleasing country manor vignette.

Not to forget the vintage china on the walls and classic English tableware that take you into a space of nostalgia. “I would carry back some pieces of china on each of my trips to Britain over the years, to slowly build up our collection here,” Husna-Tara adds.

The two highly creative ladies have again collaborated on a project, the spectacular Glenburn Penthouse in Kolkata that was completed in 2018. But then, that’s another story for another day. So, watch this space!

Kerala- A journey to the captivating amalgamation of geographically, ethically, and culturally exquisite state |