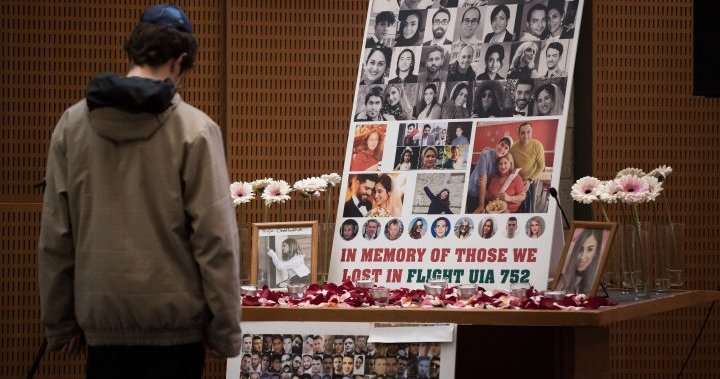 Family members of victims and members of British Columbia’s Iranian community mourned Saturday as they marked the two-year anniversary of a downed passenger jet with scores of Canadians aboard.

More than 100 of the 176 passengers who were killed when Iran shot down Ukrainian International Airlines Flight PS752 had ties to Canada. There were 55 Canadian citizens and 30 permanent residents.

“People need to know why,” said Kei Esmaeilpour, founder of the Civic Association of Iranian Canadians. His friend, Ardalan Ebnoddin-Hamidi, was killed, along with his wife and son.

“Just a week before the disaster he called me and said, ‘Hey Kai, I’m going to Iran for one week.”

I asked him, “Ardalan, do you think it’s safe for you?”

Iran has claimed the incident was a result of human error — an assertion Esmeilpour said many friends and family members of the victims question given Iran’s reticence to provide key documents.

He said many of the regime’s official explanations also raised more questions than answers.

“Iran claims that they evacuated the airspace, but there is no sign of the (that) … No evidence of communication disruption that the Iranian government has claimed,” he said.

“The government says it could be human error, but when you look at that guy, the operator that shot down the plane is an experienced guy who served in Syria with the system.”

Seven of the victims lived on Metro Vancouver’s North Shore, a hub of Iranian immigration in the region, according to City of North Vancouver Mayor Linda Buchanan.

The City of North Vancouver has lowered the flag at city hall and its civic plaza for the weekend in recognition of the tragedy.

“I really felt it was important to make sure that we let them know as a community, we want to be resilient and support them, and that we have not forgotten the events of that day and the impact it has had for many, many families — not just in my city but across the North Shore and in my city,” Buchanan said.

Earlier Saturday, Prime Minister Justin Trudeau said Canada “will not rest” until Iran is held accountable for shooting the plane down.

“I promise you we will always continue fighting for the accountability, transparency and justice you deserve,” Trudeau said in a video message.

Canada ‘will not rest’ until Iran held accountable for plane crash: Trudeau

At a partly virtual commemoration in Toronto’s north end, a group representing family members expressed anger and exasperation at Iran’s intransigence and the “glacial” pace of accountability.

“Our patience is exhausted. Today is the day when diplomacy ends and justice begins,” said Hamed Esmaeilion, who heads the Association of Families of Flight PS752 Victims.

The group is demanding the case go before the International Civil Aviation Organization (ICAO) — a United Nations agency based in Montreal — and for the RCMP to launch a criminal investigation.

It’s also calling for arrest warrants, formal government sanctions against senior Iranian political and military leaders, and for the designation of Iran’s Revolutionary Guard as a terrorist organization.

Back in B.C., Esmaeilpour added his voice to the call for more pressure on Iran, saying the victims of the disaster were innocent people just looking for a better life for their families.

“They were asking for a peaceful place to live (but it was) still their problem, and that government … their policies and all of their terroristic actions claimed their lives,” he said.

“This is the main question that should be answered. Why?”

— with files from the Canadian Press