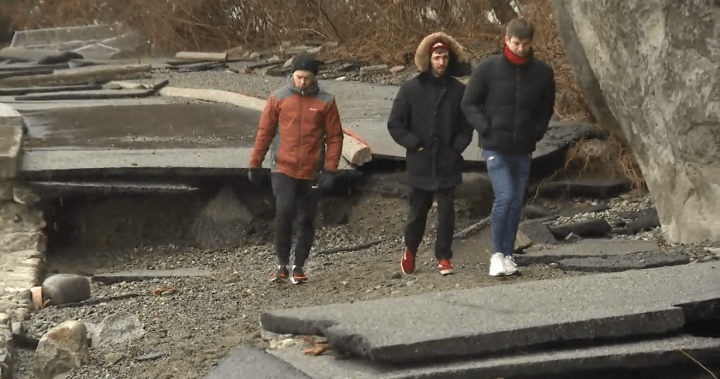 “Crazy” and “post-apocalyptic” were the kinds of descriptions Vancouverites used on Saturday to describe the destruction they saw along Stanley Park’s iconic seawall.

Cleanup from Friday’s storm that combined powerful winds, a storm surge and a king tide — causing significant damage in both Vancouver and West Vancouver — was only getting underway. There’s no estimate yet of the cost of repairs.

Stanley Park remained closed to the public today, but that didn’t stop scores of people from coming to get a first-hand look at what nature had wrought.

Reminder: the #seawall remains closed from Sunset Beach to Lions Gate Bridge. You can help our rangers & crews by respecting the closure.

Also, please be careful on the beaches. Do not climb on the debris/logs, & watch out for debris floating/below the water near the shoreline. pic.twitter.com/YhVLOQ0rXO

— Vancouver Board of Parks and Recreation (@ParkBoard) January 8, 2022

The Third Beach area and the stretch of seawall between the Teahouse Restaurant and Siwash Rock bore the brunt of the storm, with pavement that was buckled or outright washed away in some sections of the seaside path.

Some areas looked like they had been hit by an earthquake instead of a windstorm.

In a statement, the Vancouver Park Board said the park will remain closed between Sunset Beach and the Lions Gate Bridge until further notice. Staff will be assessing the damage and doing clean-up.

The Jericho Pier in Kitsilano also suffered significant damage, with boards visibly buckled, and covered with logs and other storm debris.

The pier suffered previous damage during another king tide in November.

In West Vancouver, crews were in Ambleside Park with heavy equipment, beginning the arduous process of cleaning up damage to the city’s seawalk.

Basketball-sized rocks, logs and other debris were strewn throughout the popular promenade.

The seawalk, along with both the Ambleside and Dundarave piers, will remain closed until further notice.

The District of West Vancouver said the storm and associated flooding was “the worst we have seen in decades,” but added that it was not unexpected in the context of climate change and sea-level rise.

Canada’s 2019 Changing Climate report projects Vancouver will experience a sea-level rise as much as 50 centimetres over its 2000 level by the end of the century.

The British Columbia government has advised municipalities to plan for a sea-level rise of 50 centimetres by 2050 and one metre by 2100.