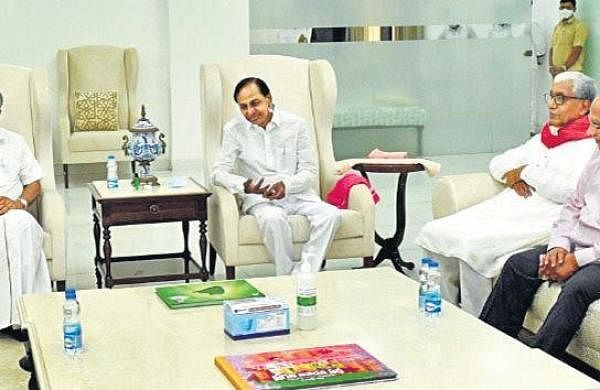 CHENNAI: TRS president K Chandrasekhar Rao’s efforts to build a national level anti-BJP and anti-Congress alternative gathered steam on Saturday with the two main Left parties in the country — the CPI and the CPM — indicating that they were ready to back the Telangana CM in his endeavour.

The leaders of the two Left parties mooted for “BJP Mukt Bharat”, which was endorsed by Rao, according to sources. The TRS president held separate meetings with CPM general secretary Sitaram Yechury and CPI general secretary D Raja at Pragathi Bhavan. He also met Kerala CM Pinarayi Vijayan. Rao had invited the top leaders of the CPM and CPI, who are in Hyderabad to attend their respective national level meetings, for discussions.

Rao meeting the Left leaders is being seen as a significant political development, which could potentially change the political alignments in the State too in the coming days. The main point of discussion in the two meetings was the need to build an alternative to BJP at the national level.

“Chandrasekhar Rao stressed the need for a third alternative, as the Congress is not improving organisationally and is unable to effectively take on the BJP. We agreed to this. Our stand too is to build a secular, democratic and Left alternative to the BJP,” CPI state secretary Chada Venkata Reddy, who was present in the meeting, told Express. The CPI-TRS meeting felt that the BJP was selling PSUs and damaging the basic fabric of the Constitution.

“Our aim should be ‘BJP Mukt Bharat’. All democratic, secular and Left forces have to unite and fight to end the wicked rule of BJP,” the CPI leaders said.The development taking place in Telangana also figured in the discussions. The Left leaders said that instead of encouraging a performing Telangana, the Narendra Modi government was creating obstacles to its development.