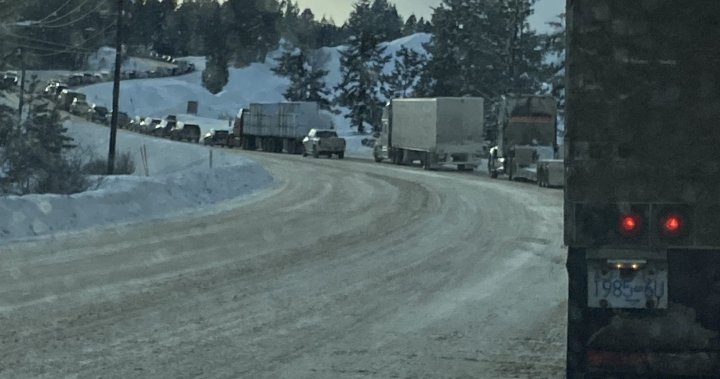 Closed since Thursday because of avalanche risk, the only route from B.C.’s Interior to the Lower Mainland for passenger traffic was reopened on Saturday afternoon.

According to the Ministry of Transportation and Infrastructure, parts of the Trans Canada / Highway 1 and Highway 3 were closed due to avalanche risk and large avalanche deposits on the road.

On Saturday at noon, the ministry sent out a press release, expecting that the closed portions of the highways would reopen sometime Saturday evening.

However, DriveBC reported just after 1 p.m., that Highway 3 had been reopened to traffic.

“Highway 1 and Highway 3 have been closed since Thursday due to avalanche risk and large avalanche deposits on the highway,” the ministry said at noon.

“Crews are working to clear the deposits after receiving clearance from the avalanche team. It is expected that Highways 3 and 1 will open this evening.”

✅ CLEAR- #BCHwy3 is now open in both directions between #HopeBC and #PrincetonBC after being closed for avalanche deposit removal. Expect major delays to remain due to congestion. @EAMOperations

There are three main routes from B.C.’s Interior to the Lower Mainland, but only two are open to passenger vehicles: Highways 1 and 3.

The Coquihalla Highway, which sustained severe flooding damage in November, has been reopened to traffic, but only to commercial vehicles.

2:05
Coquihalla Highway reopens to essential traffic, weeks ahead of schedule

Further, the Coquihalla was also closed on Thursday due to unsafe winter weather, though it was reopened Friday around 5 p.m.

“As a result of the closures,” said the ministry, “Highway 1 between Popkum and the Highway 3/5 split was heavily congested.”

The ministry said it is working with the highway contractor to support any drivers that may be on the highway.

As of Saturday afternoon, DriveBC is reporting several travel advisories along the Trans-Canada, such as a washout between Lytton and Spences Bridge that won’t be reopened until mid-January.

Keep an eye on DriveBCs major events page and our Twitter for updates as soon as they are provided to us.

For the latest highway conditions throughout the province, visit DriveBC.

2:12
Stoplights being installed along Highway 5A in Princeton to help ease traffic concerns

Stoplights being installed along Highway 5A in Princeton to help ease traffic concerns – Dec 22, 2021