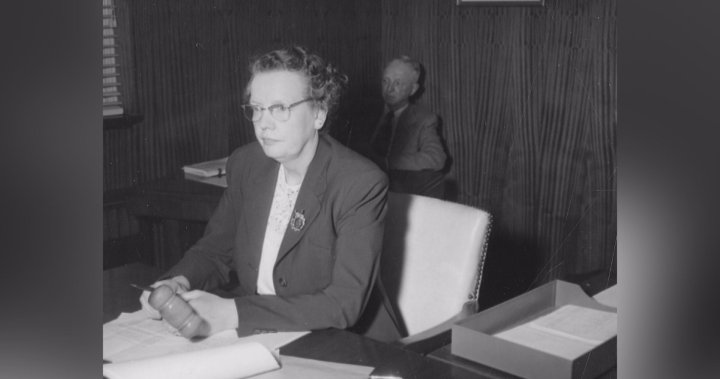 According to the Lethbridge Historical Society, Lillian Parry was born in Wales in 1900 and moved to Lethbridge two years later. She would go on to study nursing and worked for more than 30 years at the Campbell Clinic and the hospital in Magrath, Alta.

Parry also served in the Second World War in the Medical Army Corps.

“She was involved in a lot of things. One of the things that happened under her time (on council) is Lethbridge developed a health unit as a city department,” explained city councillor and Lethbridge Historical Society president Belinda Crowson.

“She made quite a mark, both as a councillor and as somebody who brought better health care to Lethbridge.”

Since Lillian Parry’s election, there have been 16 other women on #Lethbridge City Council.

Since Parry’s time on council from 1952 to 1957, there have only been 16 other female city councillors in Lethbridge.

“We’ve had two terms where there’s been three women, but we’ve never had even half of council being women,” Crowson explained.

Jenn Schmidt-Rempel, one of two women currently on council who was elected in the fall, recognized the importance of remembering women like Parry.

“It is wonderful to see inspiring women from that long ago working to better our community, our province and our area,” Schmidt-Rempel said.

The councillors said young women need to see people like them in leadership positions to know they can achieve their goals, and hope to see more diversity on council in terms of age range, cultures and other perspectives in the future.

“It’s important for us to see ourselves there, to inspire other generations of women to step up and take those leadership roles,” Schmidt-Rempel said.

Parry died in 1980 and is currently resting in the Field of Honour at Mountain View Cemetery.

The year 2022 also marks 30 years since the first woman, Ruth Elzinga, ran for mayor of Lethbridge.