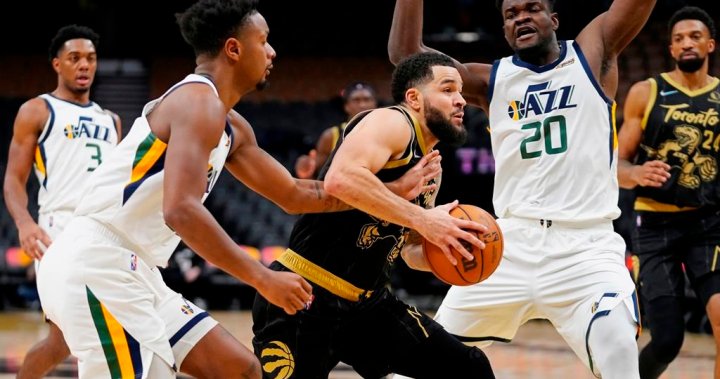 VanVleet recorded his first career triple-double, scoring 24 of his season-high 37 points in a red-hot third quarter to help dig the Raptors out of a hole and extend their win streak to five.

Toronto (19-17) scored the first bucket of the night then trailed by as many as 17 before a 15-0 solo Toronto run by VanVleet put the Raptors ahead 85-84 late in the third. The six-foot-one guard was just 2-of-11 shooting in the first half but hit all eight shots in the third, scoring 17 straight points during a 24-8 Raptors run.

“It’s hard to score like that, that’s for sure,” said Toronto coach Nick Nurse. “Especially to string them up like that.”

It marked the longest streak by a Raptor since Morris Peterson scored 17 straight Feb. 27, 2001 against Cleveland. Vince Carter holds the franchise record with 18 consecutive points.

VanVleet, who finished with 10 rebounds and 10 assists, hit a three to give Toronto a 94-92 lead going into the final quarter.

“We did really play in the second half. And we needed to … I thought the empty arena would get to us at some point, energy-wise, and we couldn’t create our own fun tonight in the first half,” said Nurse. “But we did in the second.

“In this kind of time we’re in, I’m not totally shocked about anything these days. I’m just really happy we got a W from the game, see what we can learn.”

VanVleet’s 37 points mark the most in a triple-double in franchise history.

VanVleet’s 24 points in the third fell just one point short of Pascal Siakam’s franchise record for points in a quarter. Toronto’s 45 points in the quarter were a season high.

The Jazz had gone 18-5 since beating the visiting Raptors 119-103 on Nov. 18 and came into the game having won eight of their last nine. But Utah, playing its fifth game in eight nights, found itself where the Raptors had been up until recently — struggling to field a team.

The visitors were without star centre Rudy Gobert and Joe Ingles, both in health and safety protocols, while all-star Donovan Mitchell (back), Mike Conley (knee), Bojan Bogdanovic (finger), Royce O’Neale (knee), Jordan Clarkson (back) and former Raptor Rudy Gay (heel) were all injured.

Utah’s opening five were all making their first starts of the season.

“There’s no excuses. There’s no bums in the NBA,” said VanVleet. “I don’t care where they’re from. That’s a championship-contending team and some of those guys don’t play because of that. Those are real NBA players. Those guys can play. We just didn’t answer the bell early for the first however many minutes and then it was hard to get it back after that. They had the momentum and we didn’t make shots for a long stretch of time.

“But give those guys credit. Man they played their butts off. But I was happy with the way we stayed together. We had some uncomfortable conversations a couple of times but we came out on the other side of it and we came out with the win.”

OG Anunoby added 22 points for the Raptors while Siakam had 17,

“We’re asking a lot of a group that really hasn’t played together,” said Jazz coach Quin Snyder. “A few of them have played together but on the whole, in a game against a team of this calibre, I thought particularly the way we competed in the first half and moved the ball … I was really pleased and proud of the guys that were out there tonight and how they competed.”

Playing its third game in four nights, Toronto stumbled out of the gate

Utah built an early lead with Toronto shooters coming out cold, making just three of their first 13 shots. Thanks to a 50-foot shot from Malik Fitts at the buzzer, the visitors led 40-25 after the first quarter.

“They came out and punched us right in the mouth,” said VanVleet. “And then it got out of control there.”

With 17 points in the quarter, Paschall had just one less than the five Raptors starters combined. Coming into the game, his season game high was 13 points.

Utah’s three-point accuracy kept the scoreboard turning with Toronto missing 18 of its first 23 attempts from distance.

The Jazz led by as many as 17 in the second before going into the half up 62-49. VanVleet, Gary Trent Jr. and Scottie Barnes were a combined 1-of-14 from behind the three-point line.

Toronto cut the lead to seven at 67-60 but Utah answered, with an unhappy Nurse earning a technical.

A healthier version of the Jazz, halfway through a five-game road trip that started with wins in New Orleans and Denver, had won 10 straight away from home, with its last road loss Nov. 7 at Orlando.

Coming into the game, Utah — 14-3 away from home — was tied with the Brooklyn Nets for the best road record this season.

The Raptors continue their three-game homestand Sunday against the New Orleans Pelicans.

This report by The Canadian Press was first published Jan. 7, 2021